Is there anyone who has not heard of one of the most famous movies directed by Brian De Palma with Al Pacino starring – "Scarface"? Scarface slot machine will help you plunge into the world of drug dealers and criminals! The classic movie fans will appreciate the theme, whereas fans are going to be impressed by this exciting game. No wonder if after playing the game they will decide to rewatch the film and revise the story of a legend among drug dealers – Tony Montana. Also, there is a parody to this soft - The Slotfather game.

Tony Montana on the reels – what he's got for you

The first and the greatest impression is left from the graphics – every detail is carefully and beautifully drawn. And it concerns not only the symbols on the reels – each element of the functional panel is designed after the movie too. Everything starting with shapes and finishing with colors is chosen accurately after the Scarface film.

The next thing which amazes you is the music – how often do you find a slot with original sound track? Not just the sounds, but a whole track. The melody that has become classics will touch any player and make him feel the atmosphere.

And yet it's not looking at the images or listening to the music that the players will get the greatest pleasure from – true slots fans will surely find it in the process of spinning 5 reels. In 20 paylines apart from the play cards symbols you're going to see images depicting the movie's main characters with some certain attributes like money, jewelry, weapons and cases.

All of them give different payouts – for 5 symbols of a kind you may get up to 150 credits if it's a play card symbol, and when it comes to the characters and their belongings – up to 2000! But big payouts isn't all there is for you. NetEnt's developers have got a few features. 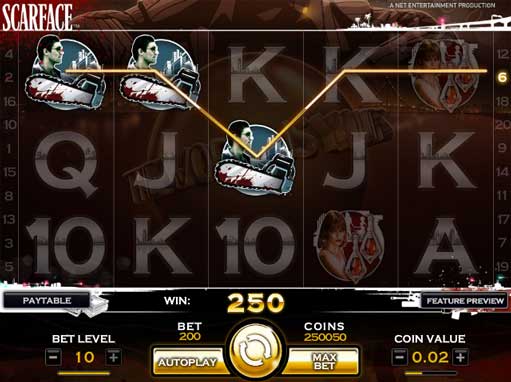 To sum up, the game has got it all to impress both slots and movie fans. Well thought-out design, high payouts and interesting features make playing this slot an unforgettable experience. The 'feature preview' function only adds to the impression of developers' excellence and proficiency.