Still the developers of software for online casinos love the ancient South American civilization. Virtually all the companies that produce online games have slots with themes of Indian tribes Mayan or Aztec, their treasures, the pyramids, the gods and so on. It is pretty cool slot as Beetle Mania Deluxe slot. And from some recently time they released one more  free slot machine game Aztec Power («the Power of the Aztecs»), which of will be told you in this article.

Aztec power presented in 5 reel and 25 paylines (the numbers of lines are not vary unfortunately). Bets on each payline can be adjusted by pressing the +/- buttons. Gameplay includes special symbols, Bonus Round free spins with additional options, Gamble feature of doubling game and other features.

All the winning combinations paid left to right if they have three or more identical symbols on the same winline. The symbols have to appear on the adjusted reels beginning from the first one. On the same line you will paid only for the highest winning combination. The total amount of obtained payments can be double in the game on chances.

Let's see, what symbols you can meet in the Aztec Power slot machine. On the reels are depicted Indian (apparently the Chief, or a Priest), Pyramid, a Knife, a Headdress of Feathers, as well as multi-colored face values of cards from ten to ace. At the Paytable you can check the brief rules of the games and the value of each winning combination at the current bet.

Special functions take by the symbols of the Wild (Gold Locket in the shape of a bird with a green stone in the center) and Scatter (Golden Pendant in the form of idol). Wild symbol serves for changing the missing symbols of combination to create the winning one. It cannot substitute the Scatter only.

Gamble Feature and other options of the Aztec Power slot

Scatter is paid regardless of the location of the reels, and the payment is calculated on the total bet. Three or more Scatters appeared anywhere on the reels trigger Bonus Rounds that means you will awards with 20 free reel spins at the current bet.

During these free spins the first active payline become so-called Power Line. With every spin the multiplier is increased by one. When a winning combination is completed it will be paid with regard to this indicator after which will return to x2. Upon completion the round all the winnings are collected to the customer account.

The Gamble Game of video slot Aztec Power is implemented in the most common form. You need to guess the color of a closed card with the first attempt. If you succeed the prize is doubled. If not, you lose your winnings of the last spin. The number of successful attempts in one round is limited. 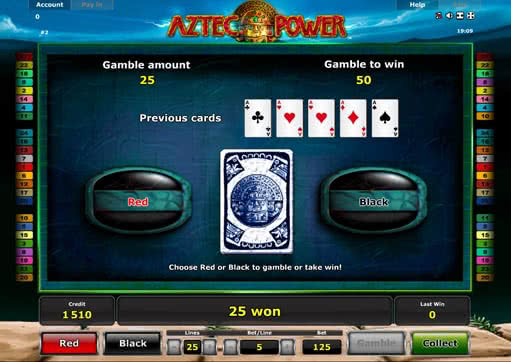 The Line button is not available to change the numbers of paylines. You can spend your time in the Autoplay mode of the game. By the way it is worth to say that you even have opportunity to double each winning while 20 free spins game, or just to collect the money.

Aztec power is common slot machine from Novomatic but with very high quality indeed amazing animated graphics and sound. You’ll like this slot when try it.