This slot carries players to a small town in the desert. Despite that the population of the virtual place is extremely small, it is regularly robbed. You'll have to shoot, drink and ride a lot but isn't it why so many people want to see the Wild West as it used to be back then?

Players will have to protect the small American town from constant attacks and help the local sheriff to restore peace on the five reels and nine paylines. Those who are lucky enough to arrest all criminals will be rewarded with gold coins. So, being on the right side of the law in dangerous and unpredictable times can be extremely profitable! By the way, here is one more slot related to Wild West - The True Sheriff for free.

There are also standard play cards symbols that pay up to 100 credits for 5 icons of a kind on a single payline, but you forget about that as soon as you learn about the features. The wild in this game acts as usual – substitutes for all symbols except scatters. It pays up to 1500 credits. The next one is the Sticky wild – considering substitutions it acts the same but it also can hold positions on the reels during the free spins and can activate 5 extra free spins. 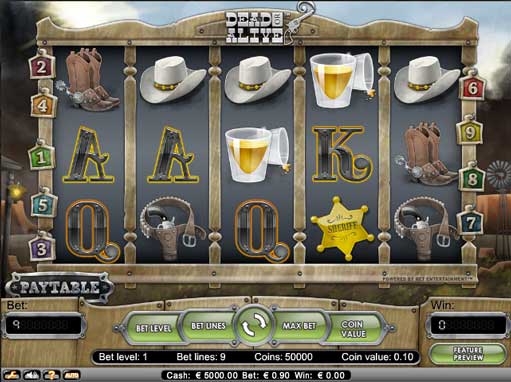 But the scatter is the most lucrative symbol – it pays up to fantastic 2500 credits! Moreover, 3 or more scatters award you 12 free spins which pay x2.

In general, Dead or Alive slot machine is carefully done which can be seen with the naked eye – the design, the graphics, the sound effects and even every symbol or feature – everything is a proof that the developers did their best to please customers wishing to feel the Wild West!