No one likes swarms of mosquitoes and gnats. However if a gamblers decide to try their skills in the slot machine Mosquitozzz developed by the famous company Novomatic, they may reconsider their attitude to this flying insects. In this slot machine is exactly the mosquito are the main symbols and almost every appearance of insects on reels gives gambler positive emotions.

The Mosquitozz is a 5 reel and 9 payline video slot game that is classic represented of Novomatic group games. To start playing the Mosquitozzz it is offered to a player to place the bet and to choose how much lines will be activated from 1 to 9. Also player need to adjust the value of a one coin pressing the Coin button. In this game you have possibility to place per spin from several cents up to hundreds of dollars whether it is real money or play for free. This slot is stunning like famous Book of Ra slot.

Features of the Mosquitozz slot

The game has several features. For example there are Scatters and Wild symbols. The scatter is image of Mosquitoes are not allowed (crossed image of an insect). In case of appearance three or more Scatters the gambler gets 15 free spins with 3x winnings multiplayer of so called Bonus Round game. By the way Scatter also is paid if it’s somewhere on the reel. Two scatters on the screen will bring the player 18 credits. Three of them 45 credits and four – 180 credits at once. And if the player catches all the 5 scatters they will be paid 4500 credits that is the second largest prize. 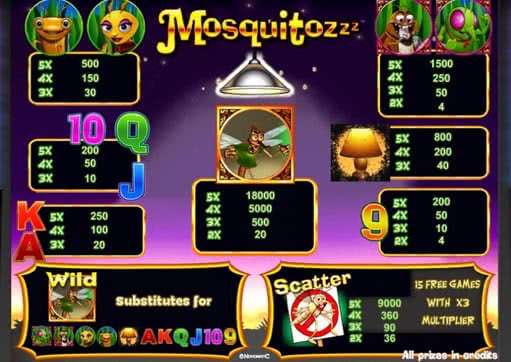 The Wild symbol is the Evil mosquito in the green t-shirt. It not only can replace almost any symbol except scatters but also brings the maximum benefit. The Mosquitozz video slot offers fixed jackpot is 9,000 credits. Player who gathers a combination of 5 Wild symbols gets this prize. 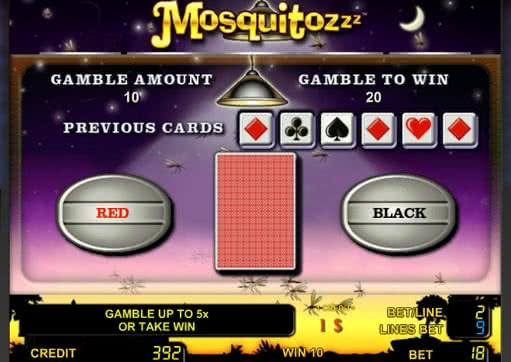 The last listed feature of the video slot machine Mosquitozzz is a Risk game. After any winning player is offered instantly increase the size of his winnings. Risk is a game of trivial - you have to guess the color of the next closed card, black or red. The gambler may to double up to 5 times running.