While playing Blood Suckers slot machine you can sometimes feel your blood running cold, as various horrors and evil vampires seem to be very realistic. Vampire theme fascinated slot developers, so meet a new slot following this theme. If you like such dark slots, try Alaxe in Zombieland too.

Blood Suckers online slot has five spinning reels and 25 paylines. There is also a risk and the bonus games. One of the slot symbols is, of course, Dracula, which is a wild symbol that can substitute all the other game symbols and increase odds for winning. A witch is a scatter symbol. Three or more images of this ominous character, matched anywhere on the screen, provide the player with 10 free spins. A symbol with an aspen stake and a hammer proves to be very useful. Three, four or five of such symbols trigger the bonus game.

In the course of the main game the gambler sets the number of lines, for which he is going to bet. Then he presses Spin button and waits for a winning combination to be matched. You win if the winning payline has three or more identical symbols in a row, starting with the first or the last drum. 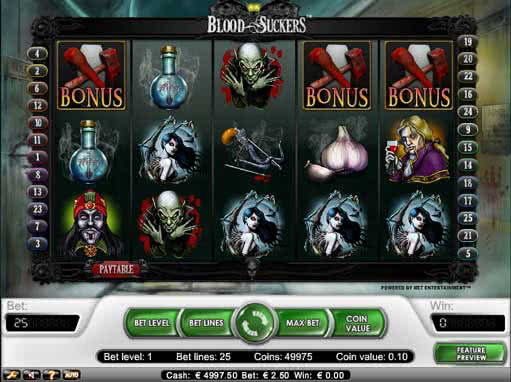 In bonus game three or more scatter symbols matched in a row, firstly, bring a prize, in which all the lines are involved at once, and secondly, provide the player with 10 free spins. During the prize spins there are also chances to catch new free spins. This can continue for quite some time. In order to start playing the bonus game you need to have the aspen stake and the hammer. If three symbols depicting these attributes appear on the line, the bonus round is opened.

During the risk game we see the coffins on the screen. The servants of Dracula and he himself are resting in the coffins. The player's task is to find out in which of them Dracula is and kill him with the aspen stake. For each opened coffin winning numbers are accrued. But if there`s a flock of bats in a coffin, the bonus game ends.