Lord of the Ocean slot review

Lord of the Ocean is a 5 reel, 10-payline video slot machine Novoline series of Novomatic. The action of this colorful and fascinating game takes place in the undersea world, where the Lord of the Ocean (According to Greek mythology Lord of the Ocean same as the God of the waves or Neptune) emperors the sea creatures in the blue unexplored depths of the world ocean. Imagine that you are lucky to find sunken ships, full of treasures. Then you will become fabulously wealthy! It is enough breathtaking fiction. This is one of the most visually pleasing games ever developed by Novomatic Company.

Neptune or Lord of Ocean is the main symbol which brings a player the hugest win, goddess follows Neptune. Lord’s kingdom includes also treasure chests, warriors, amulets animated and some of them even have their own sound bites. And sure the game has such common symbols as 10, J, Q, K and A. They will bring you less than more superior symbols.

Bonus Round and Gamble Features of Lord of the Ocean game

Lord of the Ocean is a wild symbol and substitute any other regular symbol except scattered amulet in the completed with winning combination payline. Three or more scattered anywhere on the reels symbols will trigger 10 free bonus spins. While bonus round triggered there is additional wild symbol received to fill all positions on the reel when it appears to substitute regular icons. This feature greatly increasing your chances to complete a winning combination and getting huge amount to collect.

Regarding bets, they can be changed during playing as well as payline can be activated in different numbers. To adjust bets and paylines you need press plus/minus button. Total bet is calculated by multiplying activated lines by bet per line. 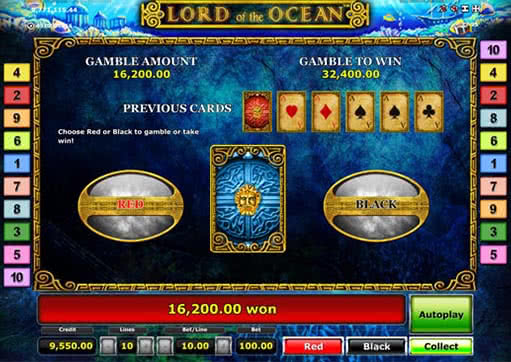 Each winning spin open Gamble feature that means you can double several times up to 5 your winnings. To double amount guess the correct color of the next hidden card, red or black. Here you’ll need to catch the Fortune smile. In case wrong guess you’ll lose winning of the luck spin. So, it’s your risk. For collecting your winnings just put the Collect button. Also automatic play function is available in Lord of the Ocean slot machine. But be careful – all your winnings will be automatically collect without chances to double money. So, this slot has very interesting bonus system like Oliver`s Bar gaminator, check it out.

Lord of the Ocean slot machine according to manufacturer has relatively high average return to player (RTP) percentage of 96%.

Manufacturer worked hardly on Lord of the ocean video slot and the result turned out great and will impress the true connoisseur gamblers.