Modern gamblers are fond of super hero thematic. Cryptologic software Company produced slot with participation of the most famous superhero in the world – Superman. The slot machine gives an unforgettable chance to save the world with Superman side by side.

It is a five reels and fifty pay lines game with awesome design and thrilling music in the background. The game interface equipped with six buttons that will come in handy. With their help gamblers can learn more about the slot features and successful slot combinations. For DC fans it would be a good opportunity to test this slot and Marvel slots.

The superman image (wild symbol) can substitute any symbol except scattered logo. Moreover, when five Superman images appear on the game reels in a raw, they will certainly hit the jackpot (10000 credits). Also, ten free spins can be awarded if Superman appears on the second, third and fourth reels.

Superman logo (scatter) is paid regardless of where it appears. Scattered wins are multiplied by total bet. Furthermore, there is a special scatter mode which can be set with a help of button “Bonus Bet”. This mode changes Scatter symbol into the bonus symbol, this feature allow to play the bonus game. 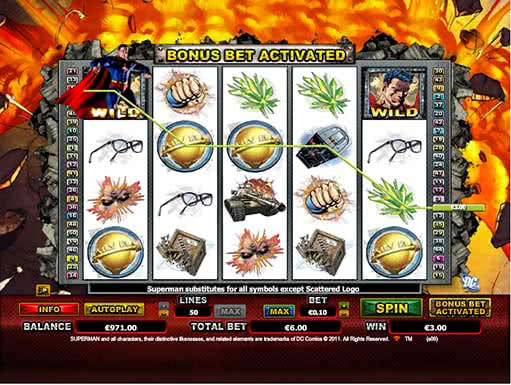 The Bonus game is called Save the world. It opens on the special screen. During this game Superman`s task will be to break through the meteor shower and rain of missiles, earning credits on his way. There will be the three doors in the end of the bonus. Gamblers task is to help Superman to choose the right door. Behind the door can be kryptonite (end of game), hostages (additional prize) or Lex Luthor (large payment to one hundred of the total bets).

So if you want to play really high quality slot machine related to DC heroes, then Superman slot is a great decision for you!