Caesars Empire belongs to five reels and twenty pay lines slots and it can bring gamblers fantastic winnings. There are 33 winning combinations. The Jackpot consists out of 2500 coins. Each gambler determines the value of coins: from $0,20 up to $5.  The hugest bet is five coins! Speaking about design and gameplay, this rtg software was done like other games of the company - in the best way.

Caesars Empire slot machine has well designed thematic symbols that can be divided into two groups. The first group of symbols are A, K, Q, J, 10, 9. These symbols form quite good combinations but the second group of symbols bring extremely high winnings. The most profitable are tasty fruits, a sword and shield symbol, a helmet and a beautiful Cleopatra pic (it is possible to try Cleopatra`s Gold for free too). 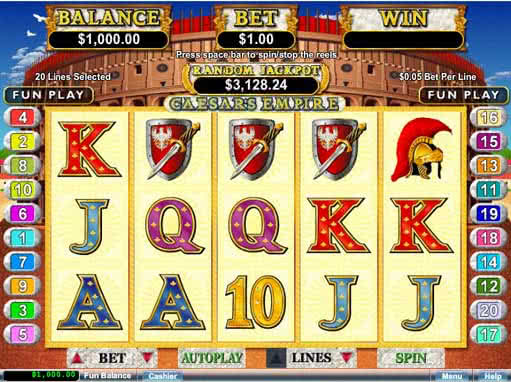 In Caesars Empire, Coliseum is a Scatter symbol. Scatter wins are multiplied. Caesar is the most important symbol because ше helps to form the most profitable combinations. Caesar appears on the 1, 2, 3 and 4 reels during normal game mode and he substitutes other symbols, except scatters. Also, when Caesar appears in a winning combination, he triples player`s prize. And when one or more Caesar images appear with Coliseum (that appears on fifth reel), you will trigger a free game feature. During this game, all winnings are doubled and each wild symbol on the reel will bring five extra free spins.