Everyone remembers this amazing and charming tale about Aladdin`s adventures. The tramp who became fabulously wealthy and got the magic lamp. It is a nice plot for the great slot machine developed by RTG. Of course it will provide gamblers a great chance to learn more about miracles that can happen during the game.

The Aladdin slot features and gameplay

Aladdin`s Wishes 5 reels and 20 pay lines. All winning combinations are considered from left to right. A gambler can set bet amount and number of pay lines without any problems because the game interface was created with a great care. What is more, this free demo version by Real Time Gaming will save gamblers money.

Aladdin`s Wishes has a greatly designed game symbols which are stylized accordingly to the traditions of ancient east. They are represented by images of Sultan Castle, Princess of Baghdad, omnipotent genie, lamp in which Genie lives, Aladdin, gold, flying rug, oriental sword, treasures, fruit. Some of game symbols have an advanced option. 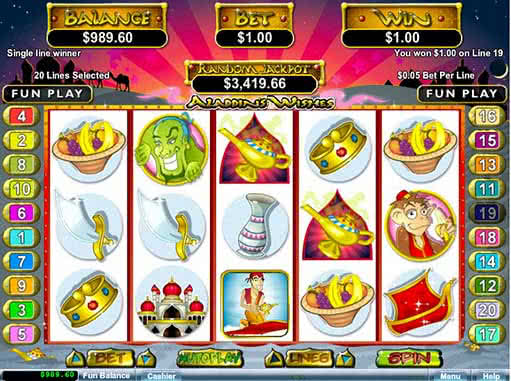 Aladdin`s image appears on the third and fourth reels. It is Wild. it can substitute any other game symbol in order to form more successful combinations. Prizes are doubled when one more Aladdin`s images takes part in a winning combination.

Genie`s lamp plays role of scatter. All scatter wins are multiplied by the bet amount. When three or more such images appear, they will trigger the Aladdin`s wishes feature. During this bonus feature gamblers task is to find the magic lamp. All lamps give extra options, but the magic lamp gives the highest amount of free spins – twenty-five. This feature can be retriggered also.