Celebrate life with Paco and his funny little friends! This noisy company will take you to a celebration where you'll be surrounded by dancing peppers, onions, tomatoes and pineapples. The jolly atmosphere of Mexican Fiesta together with lucrative symbols and features won't let you go for a long time and each time you sit down for a session, the hours will fly. (If you'd rather play a more serious game, check out The Slotfather themed after Mario Puzo's iconic story of the Godfather)

The gameplay is quite conventional for a Betsoft slot. The game's got 5 reels with 30 paylines which has already become classic for the Slots3 series. The exterior is totally themed after the plot line – the functional buttons under the reels look like traditional Mexican musical instruments – when you hit those buttons, you hear sounds of drums or a guitar.

To the left you find Paco, the main character. During the playthrough he will entertain you and when you stop for a while and don't take any spins he'll go to sleep as if he gets bored unless you play.

The symbols of the game depict Paco's little salsa friends: pineapples, tomatoes, coconuts, peppers and onions. These regular symbols award you 10-125 credits for 3 icons of a kind on an active payline, 25-375 for 4 and 50-1000 for 5 icons. There's also a special symbol that looks like a traditional toy horse that can always be found in such sort of celebrations – it's a wild that awards you as much as 2500 credits if you receive 5 of it on the reels.

But the most lucrative is the Higher or Lower bonus round – receive 3 or more hut symbols scattered around the reels to trigger this bonus. Your aim is to foresee what the next card is going to be. 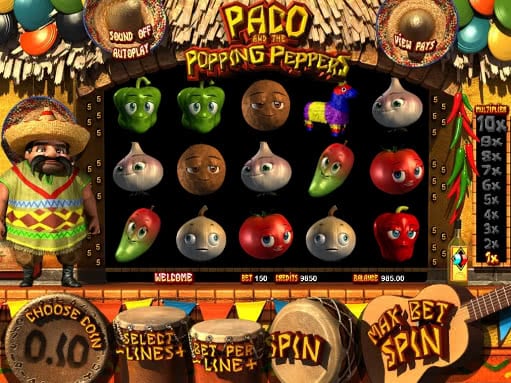 To sum up, Paco and the Popping Peppers slot machine is a very funny game that boasts of awesome graphics, sound effects and high payouts. If you've been longing for a celebration, just take a spin and start the Fiesta!