Slotfather is an example of Betsoft's brilliance. It's a truly unique and beautiful slot – it concerns both its looks and plot. Its features are as unique as the idea to make a slot that will remind us of the legendary Mario Puzo's story of Godfather. But the slot is not just themed after the book or the movie, it's a totally independent story that visually is closely interwoven with Puzo's original. Let's check it out!

Why you'll love Slotfather from the start

From the very first moment you see Betsoft were at their best, making this game. The intro video show us the high quality of graphics and gives us a general idea of features that are waiting for players. There are 5 reels and 30 paylines in this slot. You can choose both number of active lines and bets per line. The symbols are all beautifully drawn – you're going to meet Slotfather, 3 of his people – Frankie with a gun,  Sammy - kind of an accountant, the third one is connected with a feature you'll read about in the next paragraph. There's also the image of Slotfather's left hand with a big golden ring.

Other symbols include things that surround – the car that gangsters use, a bottle of wine and a glass, a spaghetti plate, a suitcase full of money, Tommy gun, a cigar, a newspaper with the screaming headline “Underworld ruled by the Slotfather” and a map of Italy. All of the other design elements are drawn with the same thoroughness, even the buttons. Considering the design, it would be fair to say that there is nothing at all to find fault with.

Slotfather's features and bonuses – as generous as the legendary Godfather

When one of the Slotfather helpers – Sammy 'Quickfingers' – appears on the reels 1, 2 and 3 on the left or on the right from the Suitcase symbol, the Sneeky Instant Win Feature instantly awards you bonus credits. The second helper – Frankie 'da Fixer' may appear on the right or on the left from the Tommy Gun symbol on the reels 1, 2 and 3, this will trigger another unique feature – Multiplier Mob Free Spins: Frankie grabs the gun and starts shooting, and the holes left on the screen of the main game will hold some bonuses – click one of them and you'll be awarded from 3 up to 10 free spins and a payout up to 3x line win. 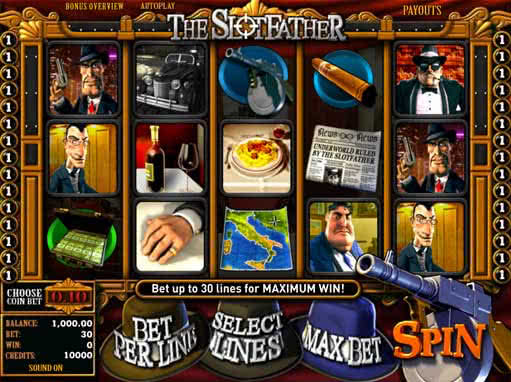 Underboss Scatter is another feature to please gamblers – here you're going to meet the 3rd Slotfather's helper and if 3 of his icons appear on any active line, you'll be awarded 50 credits, if there are 4 or 5 – 100 or 300! If 2 symbols of Sammy, or Frankie, or the suitcase, or the car appear on that same active line you'll win 15-30 credits on top of that. But the greatest pleasure is Bonus Round that's triggered by 3 or more Slotfather's icons: in the city you have 6 places to choose 3 of them where you're going to run a business – put the Slotfather's Slot gaming machines there. When the job is done, Slotfather and his guys will discuss your good work and award you bonus winnings!
To sum up, the slot is awesome and it will appeal especially to the Godfather's theme fans. But it doesn't matter whether you like the movie\the book or not, because the graphics, animation, sound effects, the plot, features and bonuses will impress anyone.