Here's another marvelous slot from Marvel series by Playtech. Plunge into the world where the delicate balance of good and evil is supported by Daredevil, a fearless superhero that will tell you a story of big money and furious revenge.

Daredevil is a 5-reel slot with 20 paylines developed by leading gaming software company. The slot  is themed after the story of a lawyer whose name is Matt Murdock. Because of an accident he got blind at a young age but his other senses improved to a supernatural degree and now he bravely fights the criminals with the help of his new acquired abilities that remind a sonar. Murdock himself is the wild symbol which can replace any other except scatter. Another important symbol is DD logo – 2, 3, 4 or 5 of them make your bet multiplied by 1, 3, 20 and 100 respectively. 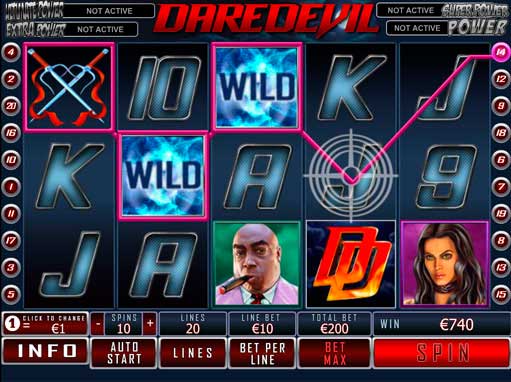 In other words betting 20 lines 10 coins each makes the total bet 200 coins which can be multiplied by 100, so if you get 5 DDs you win 20000 credits from a single spin! Besides, this symbol triggers 10 free games if you get at least 3 DDs on the reel. But it's only the hero that we see on the screen – his enemies are represented by other symbols too. Elektra, Bullseye, Kingpin, nunchucks and Japanese daggers – all these characters and attributes not just create the atmosphere but carry out different functions and some of them even trigger special features. For instance, the Bullseye: there's a moving target on the reels that you can put over any symbol before taking a spin. If the Bullseye symbol will occur under this target you win 3x your bet.

Just as the heading says, Marvel's slots are famous for their wonderful 4-level progressive jackpots. All of them are won randomly so you never know when you should place the highest bet. But if you are lucky enough to make it right it time then Power level will reward you 350 coins, Extra Power – 4400, Super Power – 28000 and Ultimate Power – a huge amount of 850000! This unique aspect alone is worth trying, go push your luck!