Play It Came From Venus slot for free

There are lots of movies and books about aliens who came to Earth with different purposes but in the field of online gambling there have been only slots themed after alien life on other planets or space ships, like Arrival, for instance. Given that, the brand-new It Came From Venus slot is quite unique since alien-involved actions take place on Earth. Let's see what's so unique about this slot machine – It Came From Venus slot review will help you.

A simple guy, working hard on his farm, was in the middle of his usual activities when suddenly he saw a meteor. It should be no wonder because the nights in the country are especially beautiful.. but it was day time. And this “meteor” was coming closer and closer until a huge flower-like creature crashed into his farm.

The events described in the previous paragraph actually make up the intro video that you watch when you start It Cam From Venus slot. This introduction shows players that the game's graphics is of the highest quality. When the video ends you find that now instead of the warehouse's ruined wall there are 5 reels with 30 paylines.

Sound effects of the game are as good as graphics. The background music creates a funny atmosphere of a country house or better say a farm, following the plot. Any event of the game is also accompanied by different sounds so that the players can completely plunge into the story as if they were there together with Skeeter, feeding the creature coming from Venus with the usual corn coming from Earth.

But the slot isn't all about the nice exterior – every element has its own functions and contributes to the process of entertaining you. For example, the panel below the reels allows you to change coin value – it may be 0.02, 0.05, 0.10, 0.25 and 0.50. You can activate the number of lines you want – up to 30 paylines as it was mentioned previously. What's also important you can change the value of bet you make per line.

High-rollers will be glad to find they can make max bets in a single click. Apart from the essential 'spin' and 'view pays' buttons you can also click 'double up' after any successful spin and play a risk-game. But this isn't a standard risk-game where you deal with cards – this game of chances is very funny and totally is nothing like the games you've seen before.

On the reels you're going to find symbols depicting different attributes of a farmer's life. There are icons with the main character and his alien friend, the farm they live at, a scarecrow and some other. And here's when you find out that It Came From Venus free slot is even more thrilling than you could think – one of the symbols depicts a military person who is looking for the “object”. So now you're going to be harder to keep your new friend a secret! 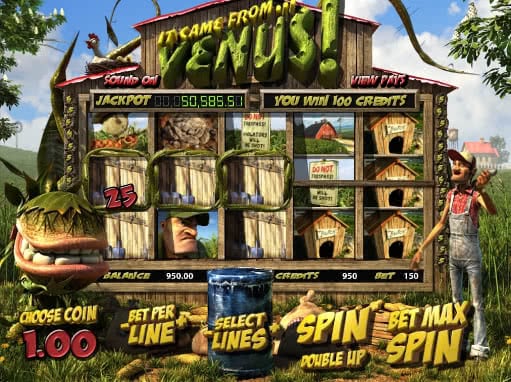 It Came From Venus slot also has some special symbols: for example, 3 food sacks on the center reel trigger free spins during which the food sacks become sticky and stay in the same place during the playthrough of the free spins mode. There are also some random wilds that bring different multipliers – 2x, 3x, 5x and even 10x – and a scatter symbol that pays 90, 150 and 300 credits for 3, 4 and 5 icons scattered around the reels respectively.

One of the most lucrative features is the 'Stack Collapsing Wins' – if the whole reel is covered with the same symbol, you'll be awarded 3x credit and the column will collapse into a single icon allowing two more symbols to appear on the reels in the empty space.

The last and the coolest feature is 'Save the plant' – the army has finally caught the creature and now you have to help the farmer choose the right box where the guest from Venus is held, and bring him back home.

All in all, It Came From Venus free slot is a very funny game. It's wonderful in every aspect – the graphics, the sound effects, the plot and the payouts and the features. But don't take my word - take a spin at the free It Came From Venus slot and see for yourself!