Ghost Pirates is a 3D video slot machine with five spinning reels and twenty paylines. You can place from 1 to 3 coins on every payline. The coins value varies from 25 cents to $10. The whole rate is $600.

The slot offers to enjoy unique game characters and numerous bonus games. There is also a separate Ghost Mode and free spins. Playing them you receive a fine chance to double your winnings.

Paid combinations emerge when three (for some images - two) or more identical symbols appear on an active payline. The payout equals to the rate per line multiplied by special factors (the maximum is x10000). You can win up to $1000. One more profitable pirate slot - Booty Time. Players may test it too.

In Ghost Pirates you will meet everything that is connected with the pirates lifestyle: Jack Sparrow, swords, skulls and bones, ships, precious stones, gold treasures, guns, a pretty woman, etc. There are some peculiar characters with special abilities. 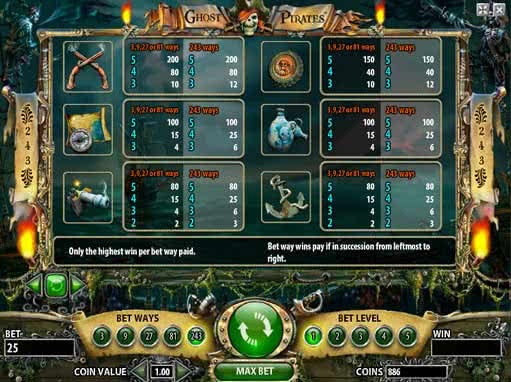 A pirate cabin boy is a Wild symbol. It can be met only on the third reel and stretches into three vertical positions, replacing the other symbols. Jack Sparrow and his girlfriend is a Scatter symbol. From three to five of these images located anywhere on the screen provide from five to fifteen free spins considering the current rate and the number of lines.

The Ghost Mode is triggered when three images depicting a one-eyed pirate emerge on the playing field. Here, all symbols turn into ghosts. The combinations that include an icon with a chest, a skull and an inscription x2, are paid two times more. Bonus images that launch various bonus games include a key, a coin of gold as well as a target barrel. Bonus games in the Ghost Pirates slot game include Blades and Daggers, Heads and Tails and Lucky Door.