This brand-new slot is dedicated to the fist fight that preceded the appearance of boxing as a sport in its modern form. It's a funny slots game by Net Entertainment, notable for its unusual graphics, funny characters and unique features.

Get ready for the action-packed features

It's a 5-reel NetEnt slot with 10 paylines. The lines are always active, so you can't activate a number of lines you want. You're going to find unusual functions, respins, several kinds of wild symbol, a variety of special characters, and other options. There's a large number of combinations and now they're even easier to receive since they can be formed no only starting from the leftmost reel, but from both sides. There's no risk-game but the excitement is no less: everything, every single element in this slot is well thought-out – you just plunge into the atmosphere of this sports kind or try other NetEnt slots for free.

Most of the icons appearing on the screen in Fisticuffs slot, depict various accoutrements of fighters and things necessary for the organization of fights. You will see the gloves, stool, special shoes, a towel, a gong, the championship belt, a cup and so on.

There are 3 wild symbols – straight, diagonal and simple wild. The straight wild is an icon of a funny bulky boxer and appears only on reel 3, and just like in all other slots it can substitute for all symbols. The diagonal is a skinny boxer with moustache – looks really funny – and it can appear only on reel 2 and 4. And again it substitutes for all other symbols (the simple wild does the same). 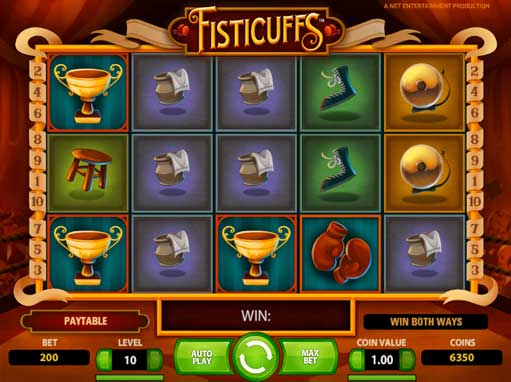 In this slot you see animation not only when you get a winning combination – if 1 or 2 diagonal wilds appear on the same row with the straight, then the bulky boxer punches the skinny one to reel 1 or\and reel 5, and all symbols between them turn into simple wilds. If 1 or 2 diagonal wilds appear diagonally to straights, then it's vice versa – the skinny boxer punches the bulky one and the symbol above or below the diagonal wild turn into simple wilds too. You will definitely find that the greatest feature is the Boxing feature – it turns adjacent icons into simple wilds that remain on the reels for 1 re-spin. It's activated when the bulky and the skinny boxers appear next to each other horizontally or diagonally.

The payouts for symbols aren't very big but the feature crops up often so you're going to find the video slot really generous. Take your first spin to see it for yourself!