Playing Space Wars slot, you will meet amusing inhabitants of the galaxy representing five civilizations. They fight in space for energy crystals, which are an important resource. Scary alien monsters frightens ordinary humanity and makes it tremble with fear. Anyone can take part in the battle if he dares to play Space Wars and is not afraid of its unusual inhabitants.

There are 40 lines on 5 reels. The unique design of NetEnt's game literally carries you to the battlefield. In the middle of the alien battle you'll find pink crystals that bring their owners huge cash prizes. To the right of the reels players can see some strange device that teleports colorful monsters and gives you credits for that.

The paytable shows players which combinations will award them the highest number of coins. There are no standard dull play cards symbols, only the outer space creatures. The least you can get for 3 of them on an active payline is 2 credits, for 4 of them – 15 and for 5 – 40. And the most expensive monsters pay 15-30, 75-250 and 200-1000 credits for 3, 4 and 5 same symbols respectively. 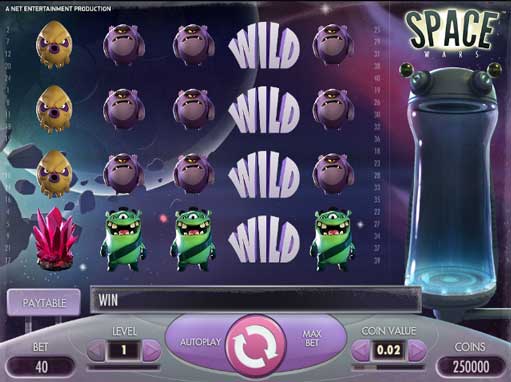 The main feature is the wild symbol that substitutes for all symbols. But it may only appear on the second and the fourth reels. And there's also a re-spin feature: a single win on a line triggers a re-spin.

To sum up, the game looks quite original and even funny due to amusing characters. Jigh quality graphics and sound effects make it a pleasure to make spins while features help you win bigger prizes and more often. So go give it a try!