Video slots industry is developing together with technological progress. In order to keep up with it, gaming software developers have to do their best and in the end players get more and more interesting games with the best quality of video and sounds. The Exterminator slot machine is the proof of Betsoft's talent to create truly unique and exciting games.

The Exterminator's slot design and symbols

Betsoft is known for the quality of graphics in their games – when you start playing their games you see it already in the intro video. This particular soft doesn't have one of those 3-minutes beautiful intros, but every detail of the game's design tells us this slot has been thoroughly worked on. There are 5 reels depicted as a wall of a nice little house somewhere in the woods.

The exterminator himself stands on left and the raccoon is constantly appearing in different corners of the screen doing his pranks – it makes the atmosphere a lot of fun! In the reels you're going to see symbols of the characters, as well as some details of the life in the country – the “welcome” bigboard at the entrance to the village, a bus stop, some trash cans where the raccoon probably loves to hide, the raccoon's tail in the bushes, his footprints, the blueprint with a map, the “welcome” rug by the door and the exterminator's business cards on the table and also his truck. All of them give different payouts – for 3 of a kind you get from 2 to 100 credits, for 4 – 5-200 and for 5 up to 500 credits.

Whenever they make a winning combination, these symbols stick in place to let you make a new spin and find out if there are going to be some new winning symbols. This feature's called the Sticky Win. Another interesting feature is the wild reel – wherever the truck symbol appears, the wild reel occurs! You also can get free spins if you get 5 or more footprints symbol on the reels – it's a scatter that activates Great Raccoon Chase free spins mode with a multiplier that may be up to 5x. 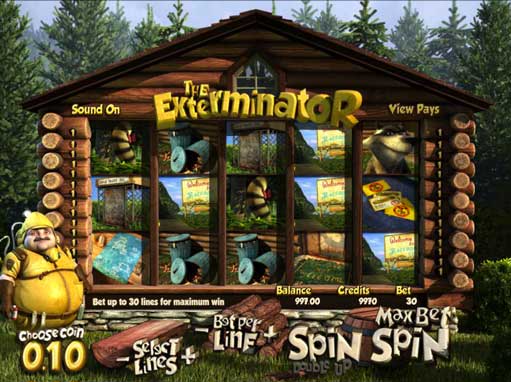 There's another scatter symbol – the Blueprint, that triggers a bonus round if you receive 5 or more icons of this kind on the screen. In this bonus game you'll have to guess where the raccoon's hiding. But the players will like best the feature that occurs after any winning combination – the idea of this 'Double Up' reminds a simple risk-game in some gaminator but in this game it opens in a secondary screen and is designed after the games plot.

So, don't wait – take your first spin and see for yourself that it's a masterpiece among the video slots.