The Fantastic four movie was a highly praised so it was totally expected that someday Playtech will get another license from Marvel and bring back the heroes fighting the evil Doctor Doom. So now we've got a brilliant opportunity to watch them on the screen again and be rewarded some awesome jackpots.

Heroes back on the screens

Since the game is made after the comics, almost all symbols are designed after the characters of the movie or its attributes: there are symbols of Mr Fantastic, Invisible woman, Human Torch, the Thing – each of them gives different kinds of payouts.

Number 4, the movie's logo, is the wild symbol, the Earth icon is the scatter one. The wild symbol may give you equally wild payouts as its name implies – if you get 2 logos on the screen your payout is 40x, 3 logos – 500x, 4 – 3000x and 5 – 10000x. The scattered symbol unlocks bonus games. Once you get at least 3 scatter symbols on the reels, you get the chance to play 12 different free games with 4 fantastic features – each feature triggers when the corresponding hero covers the whole 3rd reel and gives different effects. By the way, check out other Playtech slots related to Marvel comics heroes. 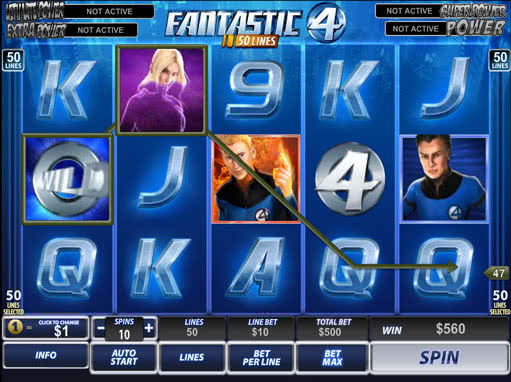 Mr. Fantastic awards you 4 spins during which this symbol becomes expanding, moreover, it can replace any symbol except the wild and the scatter ones.

The invisible woman also gives 4 spins but each time her symbol is seen on the reels,multiplier grows by 1 so by the end of the free spins your reward is multiplied by the number accumulated.

The human torch and the Thing also give bonuses alike, but the main aspect worth noting is the famous Marvel's 4-level progressive Jackpot: Power level rewards you at list 350 and it crops really often, Extra Power – starts at 4400 though not as often as the previous one, Super Power – 28000 and Ultimate Power – starting with 850000.

The game will seem attractive both for gamblers who haven't seen the movie and those who have, due to the game's quality, design and payouts.