Novomatic company doesn`t cease to surprise its fans with the niggled titles of the games it creates. This time it remained devoted to traditions and released a new slot entitled "Roaring Forties". Some people may suppose that the main game theme is the 1940-ies of the XX century. The others think the game honours Roaring Forties – a part of the ocean in a southern hemisphere between 40 and 49 parallel known for its constant severe storms.

The slot lines and symbols

But to be true the game has nothing to do with the sea at all. Roaring Forties is a typical fruit slot. This picturesque title is given because of the characteristic playing field. It includes four horizontal rows of symbols and five vertical ones (according to the number of reels). It is conventionally divided exactly by 40 paylines. Almost all images on each of the reels are not randomly situated but in groups containing 4 or 5 elements. Therefore verticals are often completely filled by the same symbol that is frequently brings winnings from all 40 lines. This is the "Roaring Forties". Novomatic developers create new slots with great quality. For example, there is one more awesome juicy game - Rumpel Wildspins free slot without registration.

A system of symbols is familiar to every player: fruits, bells, sevens and some others. The prize combinations are counted only from left to right. These five reels and forty lines allow to get small wins quite often. This is why the developers have included a risk game into the machine in which you can double your winnings an unlimited number of times. To do this just guess the color of the next card, so that the chance of an increase will always be the same - 50 percent. 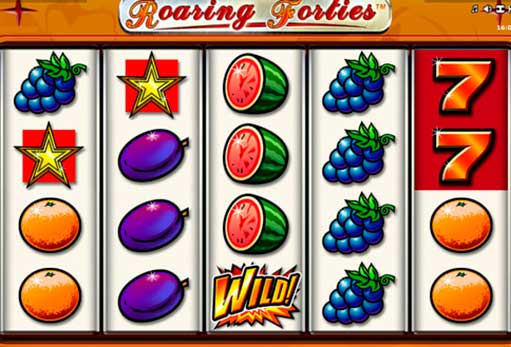 A wild symbol has the form of an inscription "Wild" and it is able to replace any image except of the star symbol. It`s because this is the most expensive symbol. Being a scatter it does not need to be placed on the active line to receive the payout. Collect five star images on the reels and get the biggest prize – 500 bets.

For those who are not sure of their game skills an opportunity of a free play is provided, so that everyone could evaluate the possibilities of the slot without investing real money. Combination of classic style with modern bonuses is perfect solution for experienced players.