Evolution is a free slot machine produced by Net Entertainment. It has five spinning reels, twenty-five constantly active paylines and fifteen playing symbols. The bet per single line ranges from 0.01 to 5 coins. The maximum bet is 125 coins. The slot has both free spins and special characters.

How to get winning combinations

Winning combinations are completed when minimum three identical symbols are arranged in a row, adjacent to the valid payline, starting from the first spinning reel. An announced payout ratio of the Evolution slot is 96.3% (according to the official data from the manufacturer). 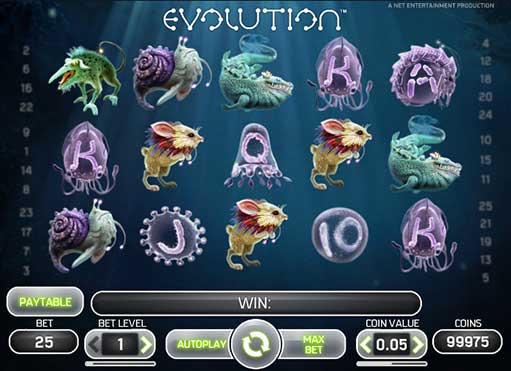 The symbols of Evolution are fantastic and imaginable animals created by developers from Net Ent. Each of them has a Latin name (of course, fictional). Symbols of the playing cards can also be found in this game. Well, a scatter is payable regardless of its position on the screen. Two-five of these symbols provide a payout in the amount of two, four, twenty or a hundred times of a total bet size per spin respectively. More than three scatters start from ten to twenty free spins.

The Evolution feature is triggered during free spins. It allows to evolve up the evolution of the symbols (it increases wins). Anyway, the game gives a lot of fun.