For many years Zorro has been subject to numerous legends, stories and books, and today he has finally become the main character of movies and games of all sorts. Aristocrat, a prosperous gaming software development company, couldn't miss the chance to make a slot machine themed after the true hero's story. So now players have a wonderful opportunity to test a highly-qualitative slot carrying you away to the world where justice always wins thanks to Zorro.

Zorro slot machine is the classic game that has been popular since it had appeared in Aristocrat's land-based casinos and then was taken to the online world of gambling. Gamblers appreciate its 'intuitive' interface and convenient location of all functions (like Red Baron slot).

In the bottom you find a panel where you can control the number of active paylines and the value of bets. Moreover, you can make both of them max in one click. Next, you have the comfort of triggering the 'autoplay' mode and just relax watching the reels spinning. Apart from the essential 'info' and 'spin' buttons, you'll find 'gamble' which allows you to double your win after each successful spin (and even do it twice). 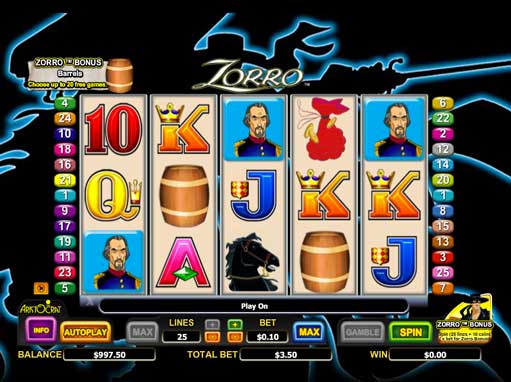 Other symbols include a bag of coins, a barrel and play cards signs 10-A. The latter, by the way, are involved in the Zorro bonus: when you press Zorro button in the bottom right corner, you trigger the bonus during which 10-A turn into Z, O and R letters and a random feature is started. It can be Tornado, Gold Coins, Wild Z, Barrels or Magic Door feature. All of them imply different bonuses such as multipliers (up to 500x) and free games.

In general, the game's graphics and sound effects aren't exceptional, and the story isn't something new to the world, but the bonus system and lucrative symbols can make up for any drawbacks. So don't hesitate to make your first spin and try all of its unique features! Have fun gambling free Zorro slots and improve your skills.

mahoganie38
I just want to play for fun.
Slots Software