This qualitative slot is dedicated to the German fighter pilot considered the most skillful, professional and decorated pilot of the World War I. This brave man has won officially 80 battles – there may be more, who knows. Due to his solid talent of a pilot, Manfred Albrecht Freiherr von Richthofen has become a hero and the main character of numerous books, movies and other media content.

Taking into account the standard functional button in the bottom and quite simple design, the Red Baron slot machine can be considered a classic slot (like Choy Sun Doa). Among the expected functions we also fing “gamble” button which can double or even quadruple your current win.

Against the background of the blue sky, where the pilot won his 80 victories, we see 5 reels with neat icons. The main symbols are the Red Baron himself and his aircraft painted red (which combined with his noble title led to appearance of the nickname). Both of them pay 1500 credits for 5 of a kind but for 4 you get 1000 and 500, and for 3 – 500 and 200 respectively as aforementioned.

Apart from these, we see a symbol depicting a young woman, an airship, a dog, a retro player and play cards signs 9-K. They award players 10-100 credits for 3 symbols of a kind, 25-250 for 4 and 100-1000 for 5. But the most lucrative are of course special symbols, since they give you a chance to win up to 15 free games and multipliers!

The wild is the medal. It appears only in the middle reel and substitutes for all symbols. Scatters are targets, and they appear on reels 2, 3 and 4. What's more, it triggers the Mission feature which has 5 missions and1 bonus to choose from. Besides, free spins can be re-triggered, which is really generous of the slots manufacturer. This is why Red Baron free slots must be tested. 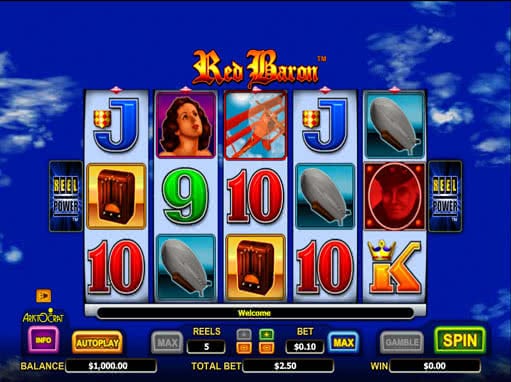 The last point to mention is the main appeal of the game – the famous Reel Power. So you play not the paylines, but the whole reels which in total makes 243 ways to win! So don't hesitate, and just make your first spin in this extremely lucrative and 'historical' slot.