Frog Hunter slot is one of those gaming machines that allure you with its looks, style and simple gameplay, and then it turns out that you just can't stop spinning the reels. This slot totally makes you plunge into the atmosphere so that you relax, forget troubles and trifles, and only want to play this BetSoft slot. Let's see how it happens.

It's a high quality slot with great graphics and sound effects. From the very first moment you will definitely see the developers did their best to create a good game that has everything a gambler might want to see.

There are 5 reels in high resolution that host different inhabitants of the swamp. You're going to see how male and female frogs look when there's no human eye around – funny icons depicting frogs with bow-ties and updos pay from 25 to 100 credits. Apart from them you're going yo see a crocodile and a mosquito. These guys award players from 20 to 100 credits.

Other symbols depict fruits, classic for the gambling world: water-melons, plums, lemons and cherries. These aren't the most lucrative symbols but you still may get up to 100 credits for 5 icons of a kind on an active payline.

Speaking about paylines, unfortunately such a bright and colorful game has only 5 paylines. That may be considered too little but at least you can regulate the value of bets as you like up to as many as 5 credits in 1 coin.

Another nice feature of the gaming machine is that you can not only double but triple your wins! After each successful spin you can click one of the two buttons and push your luck: when you choose doubling, you have to guess right which of the four same symbols hide your reward. Out of 4 symbols, there are 2 with credits. If it's tripling that you've chosen, then you guess which out of 3 symbols has your prize. 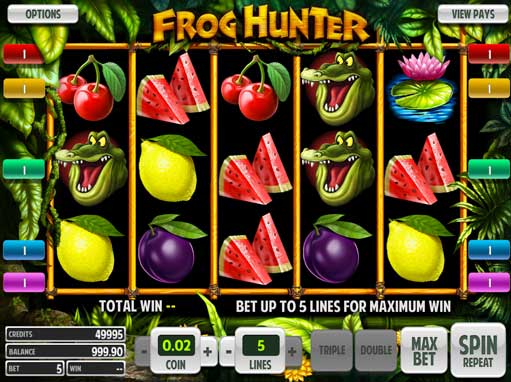 In general, such little features make the game completely unique in comparison to other games with seemingly the same gameplay. Gaminators, for example, are out of date concerning the visual aspect whereas the newer slots of the kind can't boast of a possibility to triple your wins.