Do you want to become a part of a real detective story with a robbery, pursuit and investigation that follows after? Bust the Bank slot - video slot playing which player will definitely receive a lot of pleasure. It has 243 different winning combinations and 5 reels. The maximum bet of 300 coins in terms of a lucky game will bring a nice win.

Tame symbols of the game

Symbols of the slot: funny robbers Bob and Larry, a police dog, bank building, a safe with money, a bomb with alarm clock and many others. A logo of slot is a wild. This useful image traditionally substitutes any other symbols except special ones like a Bomb Box, a Pig and a Safe. It also helps to create new winning combinations. A Bomb symbol is a scatter sign that can bring free spins. 3 and more scatters give 8 rounds for free. Moreover, this Bomb symbol appears on the reels during the bonus feature a player is rewarded with an additional prize spin. Each player has a chance to win. If you like this Microgaming software, check out Bobby 7s slot machine (it is about robbery too).

There are three bonus games. A Safe bonus game activates when a green safe on the first or the fifth reel appears. Once the sign appears on any of these reels the safe opens and the player receives a random prize amount of coins. You can earn up to six such prizes for a single spin. A flow of gold coins that fall from the safe is not just a special effect. If the safe appears over any other symbol a prize that consists of a random number of coins will be doubled during the flight of coins from the safe to the player’s wallet. 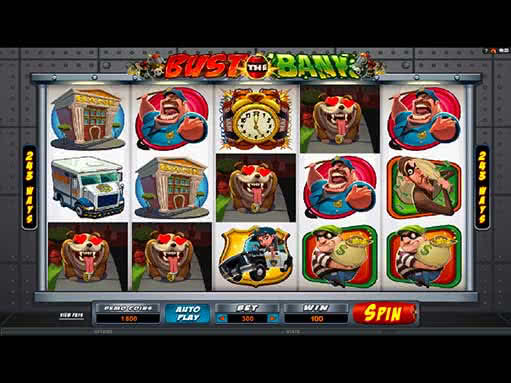 The very idea of a Pig bonus game is also interesting enough. In Bust the Bank slot someone has already gathered a certain amount of coins for you and put them inside a pig. Now all you have to do is to catch a pink pig on the third reel and break it clicking on the screen. All its contents will be immediately yours.

A Robber bonus game is a real surprise because it can occur in any time. You'll see how one of the thieves, Larry or Bob, immediately after the robbery escape from the dog right on the screen. While running he loses a bag of money and a random amount that fell out of the bag will be yours.