The standard process of spinning the reels seems impossible to be changed or seriously modified, but sometimes gaming software developers present some really outstanding products that totally differ from their "one-armed" analogues. Gonzo's Quest slot machine game, created by NetEnt, is an amusing story about the Spanish conquistador who has been wandering around jungles for ages in search of the mythical El Dorado.

Gonzo's Quest free slot has the standard five reels and plenty of paylines – twenty but the slot's uniqueness lies in the way the symbols appear – they do not just hang in the reels and stop at some point but they fall down like from the sky. And if you managed to receive a winning combination, the winning symbols will break down and disappear allowing new symbols to fall down – it's like a second spin without actually taking it. So you may win several prizes in a single spin! Besides, this  always goes with a certain multiplier which increases with each winning combination in a row. Probably, this game can be compared with Rook`s Revenge slot. 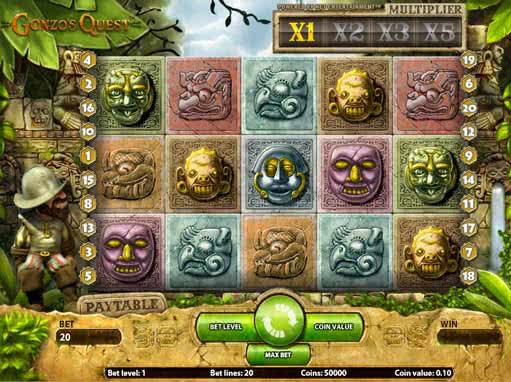 Everything seems elementary, but think how profitable may the spins be: for 3 symbols of a kind you may get from 3 up to 50 credits, for 4 of a kind – 10-250 and for 5 of a kind from 50 up to 2500! There's also a new symbol in addition to the wild one: it's called Free Fall and it each bet line with 3 such symbols activates 10 Free Falls. The only drawback may seem the fact that there are no standard bonus rounds and other functions gamblers are used to, but nevertheless the slot's got wonderful appearance, funny storyline, some new extraordinary features and it's really exciting. So the absence of bonus rounds is easily forgiven.