Imagine yourself in a desert. The first thing you think of is looking for an oasis, but have you ever thought that water is not the only treasure of this place? This iconic free slot will prove that a desert holds some more secret treasures than the reviver.

The new looks of a well-known slot

This game is the 5-reels 20-paylines sequel of a well-known Desert Treasure slot. This time we get more features, higher payouts and enhanced graphics and sound effects. If you want to learn the difference step by step, the first you will notice is a noticeably more memorable soundtrack. Then you'll find Playtech improved the picture quality when you see the reels, the symbols and it's animation in the winning combination. On the reels you'll meet everyone you were promised to see in you childhood when reading fairy tales about deserts and caravans – a princess, an arab, a camel, an oasis, such attributes as a map, cobra and of course play cards (9-A) with sandy creatures, like snakes and scorpions, drawn on them. By the way, what do you think about Book of Ra demo? 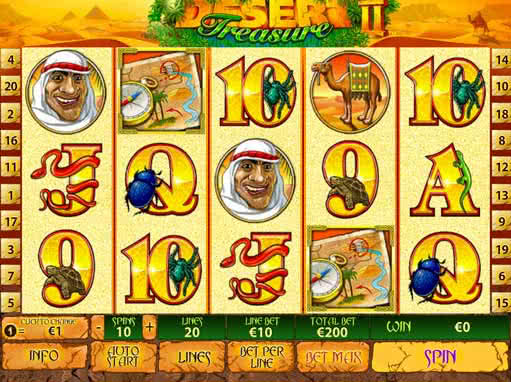 The princess is the scatter symbol at Desert Treasure 2 slot which triggers 15 free spins if you receive at least 3 of a kind on the reels. The cobra is an expanding wild that substitutes for all symbols except the princess and map signs. By the way, the map is the symbol you need to trigger Oasis Bonus. The Arab symbol gives highest payouts  (5x – 10000, 4x – 2000, 3x-200) but the oasis and the camel don't lose much: if there 5 of oasis symbols – 500 credits, 5 of camel symbols – 400. The bonus round is funny and easy to play – you have to choose correctly the treasure boxes, but that's not all – you have a chance to get to the next round, which is either the Secret Tent or the Hidden Sanctum where you are going to choose certain items.

All of this changes are worth trying the new version, so don't wait, go push your luck right now!

steve
put the game back the way it was a few months ago, it is no fun this way. the betting went to 20,000, the starting amount was 10,000, we could get 5 shieks, 5 ladies, put itback, thanks steve.
Slots Software