The team of superheroes from the universe of comics Marvel, known as The Avengers, was born back in 1963 thanks to the fantasy of a writer Stan Lee and an artist Jack Kirby. The first group included Thor, Iron Man, Wasp, Ant-Man and the Hulk (you can find games themed after them here too - Captain America slot, for example). Later there were numerous changes in the team and creators regularly released new series. This all only boosted the popularity of ‘The Avengers, and in 2012 The Avengers movie based on the comic book hit the cinema screens. Finally gamblers can enjoy The Avengers slot machine powered by Playtech!

The Avengers slot has a typical for Playtech slots gameplay. In 5 reels players find 20 paylines. And though you can’t change the number of active lines you can adjust the game as you wish by regulating the bet value. You also can use the autoplay function, however you can’t choose the coin value.

Viewing the paytable you’ll find all the main characters - Captain America, Iron Man ,Thor, Hulk, Nick Fury, Black Widow and Hawkeye. These are the regular symbols, as well as play cards symbols, and all of them pay different sums. However the biggest payouts can be received for special symbols like the S.H.I.E.L.D. logo - up to incredible 10000 credits! It’s the wild and acts totally like a typical wild which means it can substitute for all other symbols (except the scatter which depict the Avengers logo).

The main feature is called The Avengers Assemble On Reels and it awards you 200x multiplier. Free games can be awarded by the icons of the superheroes (not including the S.H.I.E.L.D. guys). The bonus round is called Wall of Heroes and during the playthrough of it you can win some free spins too. 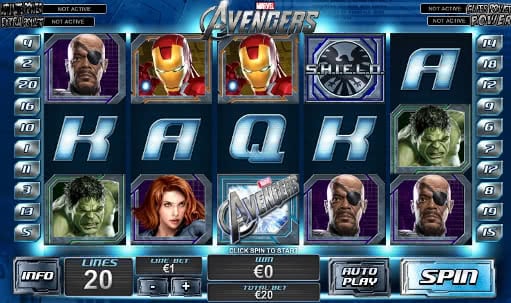 In general, The Avengers slot machine is an easy-to-play game that will appeal both to beginners and experienced players due to its sharp graphics, thought-out rewards system and especially the plot (if you’re a fan of super heroes stories).