Party Games Slotto may confuse some player from the very start just with its name but you can be sure that it's totally a slot machine and not a lotto in any aspect. Being a product by Novomatic it offers gamblers the modern gameplay based on the best features of gaminators.

The game's got 5 reels with 20 paylines which is twice as much as an average gaminator has on offer. Under the reels there are a few buttons that allow you to adjust the game the way you like: you're able to activate as many paylines as you want, and change bet per line – starting with 0.02 up to 5. There's also an 'autoplay' button after clicking which you can sit and relax, watching the reels spin until you push 'stop'.

The other two buttons are obviously 'start' and 'paytable'. Clicking the latter you can view all the symbols and their payouts. There are icons depicting play cards signs 10-K and they pay up to 500 credits. Symbols like cherries, plums and other kinds of fruit pay 25-100 credits. The sevens and bars are the main symbols of the game and pay the biggest – up to 1250.

The slot also has some special symbols. The wild can occur on any reel except the second and it can replace any symbol in order to complete a winning combination. There are also 4 characters symbols – 3 or more sheriffs trigger the bonus round where you'll have to pick one of other 3 characters and reveal a prize. 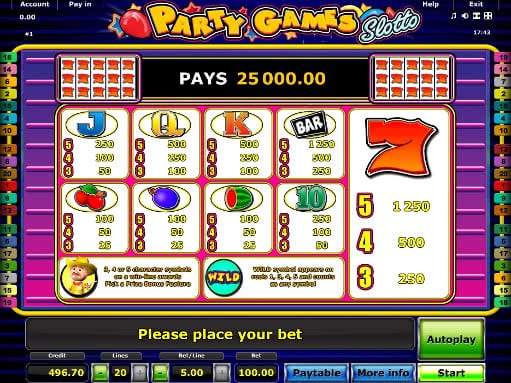 In general, the game's really good – it's got a convenient gameplay, high payouts, fine graphics with high definition so you can play it even in full screen mode unlike old gaminators. But it still lacks some features. At least a risk-game that would let players get a chance to double their wins.