Do you want to feel yourself like a wolf from Wall Street? Do you want to be rich and spend lots of money? Then slot machine Money Talks certainly deserves your attention. Produced and designed by famous in the gambling world company – Novomatic. New slot machine Money Talks will not only give an opportunity to win, but also surprise you with bright and colorful interface. You might already guessed game thematic and it is not surprising that it is dedicated to money and money earnings. The game itself is familiar and very similar to another slot in this series - Money Game. All the difference between them is that Money talks has increased benefits and improved design!

Money Talks is a classic slot machine with five reels and nine pay lines. On the five spinning reels of this slot, you can see everything that is somehow connected with money. Seven money symbols: gold coin, a pack of one hundred dollar bills, purse crammed with money, huge handbag with denominations, sac full of bonds, dollar image and the image of the prolific businessperson. However, you can face card symbols too: A, K, Q, J, 10, 9. To find out which combination will bring the greatest prize, you have to press the button «Info» in the dialog box displays and a table of payments will appear without a peep.

Businessperson or as he is often called an executive can substitute any other symbol except Scatter. That is why he is called Wild symbol. In the case of its presence in the winning line, he will multiply the winning by two times compared with the standard! In addition, if you face five executive images on one line you will receive highest gain – 9 000 credits. 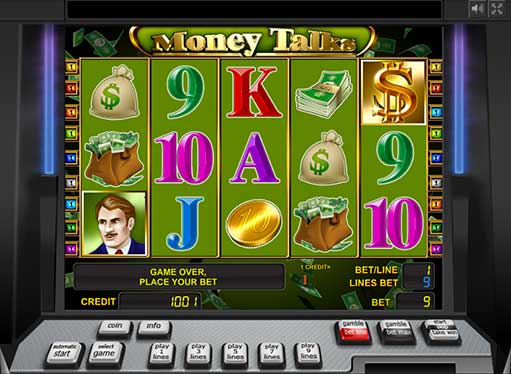 Dollar image is a scatter symbol. Three or more scatter symbols will launch a Bonus game with fifteen or more free reel spins. All winnings earned during Bonus round will be multiplied by three times compared with standard! If an image of a dollar sign appears only in two places on the reels, gambler will receive eighteen credits, which is also good.

As in many other machines, Risk game is also available. Risk game can double any successful combination. All you have to do - is to guess the color of the closed card after pressing «Gamble» button.

Money Talks brings lots of pleasure and excitement to experienced gamblers, but it is also great for beginners due to its simplicity. And of course it can bring huge earnings for people who knows that money likes to be counted!