Review of the Booty Time slot

Captain Squawk's Booty Time - free slot machine manufactured by Microgaming Company. This slot takes you into the distant sea, where feathered pirates captures peaceful ships. None other than feathered Captain Skvok leads desperate thug`s crew. He is ready to share his loot with players if they dare to risk.

How to get the prize

You will enjoy playing on this 5-reel slot machine from the first minutes! You can choose from one to twenty-five active lines and then start you spin! Playing symbols are really interesting and exciting. Primary among these are the Captain Skvok and his crew. Also, pay attention to such images as the bottle of rum and playing cards, which are drawn on the black pirate flags. All of them are able to form lovely winning combinations. However, the most advantageous symbol is, undoubtedly, logo of the game, because it is a Wild symbol. Wild can substitute for any other symbol to form a winning combination and it can double your payments.

There are only one symbol that cannot be replaced by Wild symbol, it is Scatter symbol. Scatter symbol in the Booty Time slot is represented by the image of the chest, which is filled with gold coins. However, there is no need to replace Scatter: it will give you a full five total bets, unless of course three chests appears on the screen. Well, if a scatter drops both on the first, third and fifth reels of the slot machine you will be forwarded to the bonus round! 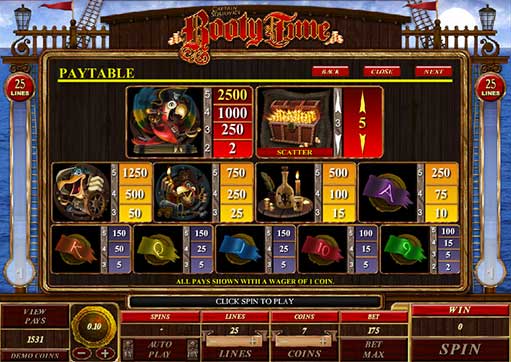 Treasure chests in the bonus

In the Bonus round player must select one of the Scatter symbols. After that, you will know how many chests you can open during Bonus game. Each chest gives a certain number of free spins with multipliers. After that, you can start spinning. These spinning will be extended again if three Scatter drops on screen again.

Ready to start your adventure and discover pirate treasures? Then Captain Skvok welcomes you on board of his pirate ship!  Start playing Microgaming software now to increase your wealth!