A dragon slot machine from NetEnt

Instead of dodging dragons, players of the Dragon Island slot machine are hoping to find them. Net Entertainment has created some fierce dragons to reward gamblers with coins. This five-reel video slot machine also has some unique features and some intense artwork to keep players spinning.

The battle of the dragons

The entertainment begins with Win Both Ways feature and Spin button. Players can get prizes when identical symbols appear in a row. Betting on both ways means players bet twice the amount as they do if they turn off Win Both Ways feature, but turning off means turning off Golden Wild symbols, which means missing out multipliers that increase a win from 2x to 8x. Also, if a player is lucky enough to line up 5 identical images in a row while betting the feature, then he wins a double prize. If you like this dragon slot about beasts, you will love Octopays slot and T-Rex slot games. 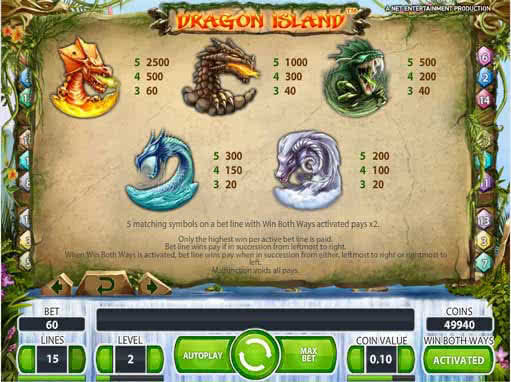 Matching 2 scatters in a spin causes some heart-clenching music and the reels to slow down. Landing a third scattered symbol sends a gambler to 10 free spins. Hitting four scatters gives 20 free spins, and hitting five scatters awards 50 rounds for free. Additionally, during such bonuses, a dragon will pop up randomly on one reel to make all three symbols wild for that spin. A vacation on Dragon Island is just a few clicks away.