Viking Mania is an online slot game developed by Playtech company with 5 spinning reels and 20 paylines. It is a dynamic game with bonuses and interesting symbols: vikings, warhammer, drinking horn, simple simbols and etc. Read the review and start playing it without deposits.

How to play Viking slot

A wild symbol of the slot is a Viking. It can be seen on the second, third and fourth reel only. However, it has the power to substitute all other symbols excluding the Scatter. The scatter is represented by a hand-made map of the terrain. Such symbols are payed in any position on the screen. The number of activated paylines is not important. The amount you won is calculated by multiplying certain ratios by the total size of a bet. Three or more Scatters in any position on the reels indicate the beginning of the ten free spins at the current rate. Payments, made by them, triple ratios, and Wild symbol expands to the entire spin. You can renew spins unlimited number of times. 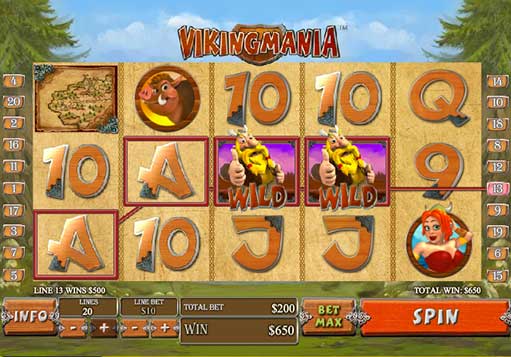 Bonus is a huge hammer. When this symbol appears in a central position on one of the reels, the last becomes active. It looks as follows. Viking is hammering a stone. The letters B, O, N, U or S are separating from it and falling on the reels. When the word Bonus is completed, an additional round begins on the second screen. Already typed letters remain until the next gaming session. But they disappear if you alter the bet size.

Playing the bonus game you'll encounter a red-haired viking, crucified on a wooden circle. You have to throw different weapons at him. Prize payouts reward successful playing efforts. It is an unique bonus round and playing other playtech slots you will find other bonuses.