Nowadays many gamblers are tired from standard slots, and they search for something special. If you belong to this kind of players, then Four By Four slot machine is designed just for you. Microgaming Company has been famous for its eccentric games, but this time it seems that Microgaming surpassed itself. Four by Four uses a minimalist approach with vibrant colors that give the game a unique flavor and aesthetic appeal.

Let us talk about unusual gameplay. There are no reels. Playing field in Four by Four is divided into sixteen cells that will be filled with various symbols when you click on the "Play" button. As you can guess from the name of the game, four - is a key figure. Payments are given for 4 identical symbols, which are situated horizontally or vertically on the cells. This slot uses cascading principle: symbols, which already formed successful combination, fall down, and instead of them new symbols fall from the top. There are only five game symbols represented by crosses, pluses, circles, diamonds and stars. This is a good slot for beginners and those gamblers who don`t like huge variety of symbols. 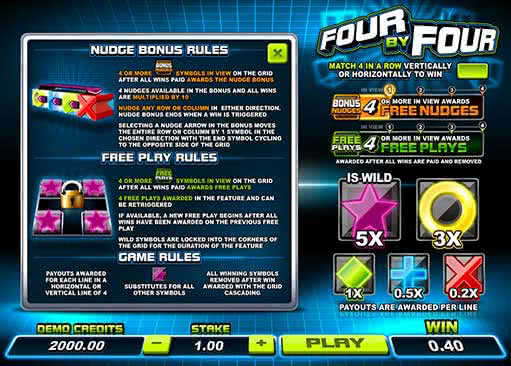 Pink Star symbol operates similarly as a Wild symbol. So, Star will substitute any other missing character. However, Four by Four slot game has another two special features: nudge bonus and free play bonus. To find detailed info about these features click on "View rules" button.By the way, Triangulation slot is a very creative game and it was created by Microgaming too.

In Four by Four slot machine, you can choose the amount of bet. Minimum bet - only 0.10 credits, but if you want to get big wins, it would be better to bet 50 credits per game.