Book of Ra slot is a 5 reel (non-progressive), 9-payline slot machine that is well known among advanced gamblers. The game developed by big-name company Novomatic that released more than a dozen hits in the gambling industry. This gaminator is notable for a keen graphics, sound bonus games, an excellent algorithm. All of these allow us to say that Book of Ra is one of the best games in the modern history of slot machines (see also Mystic Secrets slot).

The game takes place in a mysterious ancient Egypt, where the Pharaohs and the goddess Cleopatra, where scarabs can be found in crude crypt and where Indiana Jones goes to meet the new adventures in search of the Book of Ra. That’s not all symbols in the game. There are the generic Ace, King, Queen, Jack and 10 as well.

To win the game Book of Ra you need to complete a line of two to five like symbols falling down on adjoining reals. The more the same symbol images, the bigger the payout. Therewith each different symbol has its price. Indiana Jones and the statue of the God RA are the highest paid ones. Symbols of Gold Jewelry are paid less, but still in price. And playing cards offer the small winnings. The game has a function of wild symbol Golden Book of Ra like the joker in the card games that can replace any other symbol in the game to complete winning payline. 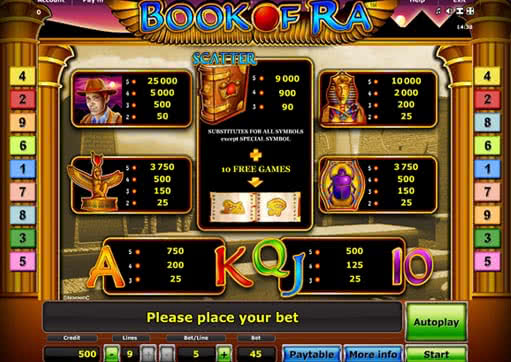 From time to time like symbols have to appear on adjacent reels to win, but there is the exception on the rule is Scatter symbol (Golden Book of Ra also takes this function). That means if there 3 or more these symbols scattered anywhere on the reels, it will launch the Bonus game rounds.

The number of activated by player paylines is not fixed and can be changed during all the time playing. Classic game Book of Ra offers up to 9 paylines and Deluxe version is up to 10.

The bets can also be changed during the game. The player can adjust the bet by pressing the +/- buttons. Depending on the number of activated paylines the total bet per single spin calculating by multiplying the bet per line to the numbers of activated lines.

Bonus Rounds of Book of Ra

When you see on the screen three scatter symbols Golden Book displayed anywhere on the 5 reels that means you will be awards with 10 free spins with a Special Bonus Expanding Symbol (Golden Lion and Golden Harp) that is used on the free spins. Bonus Games starts. Thanks for that Bonus your winnings become more frequently and won amount makes much higher. In addition in the Bonus Game one of the reels is filled by some random Symbol and if that Symbol is Wild one then wait for the huge winnings. 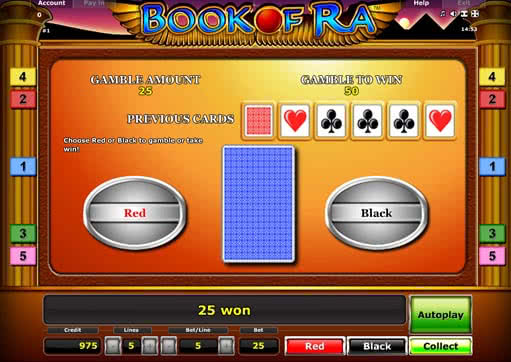 Through the Bonus Round player often can catch three Golden Books again and launch the new Bonus Game. That’s why Book of Ra online is the one of the most profitable gaming slot machines. By the way the Book of Ra has relatively high average return to player (RTP) percentage of 96, 99%.

Free Bonus Games, Wild Symbols and Scatters make the game popular and favorite among lots of players over the world.