Strange as it may seem, by this day there are free slots on almost any imaginable theme but somehow the topic of secret societies and Illuminati in particular hasn't been revealed in the field of gaming machines. The curiosity of humanity has always been the engine of progress. There are numerous books and movies based on the secrets of the elite and now gamblers have a chance to touch one of the biggest mysteries of all times – the secret code hidden in signs around us.

Secrets behind the features and symbols of the game

Secret Code slot, without any doubt, is outstanding. The design and plot are both well thought-out. Every detail you see on the screen is carefully drawn and the features tend to be rather unique.

The first thing you pay attention to starting the game, is the sound effects that make the slot's atmosphere unforgettable. As if you were the main character of popular Dan Brown's novel – trying to discover the truth behind the signs for the sake of humanity. If you adore such slots, so try Jekyll and Hide too.

The next important aspect is the symbols found on 5 reels with 20 paylines. Players won't find boring play cards symbols, instead there are 3 unusual symbols engraved in stones of 3 different colors. There are 3 rings with 3 more symbols depicted in their gems. They pay up to 10 credits for 3 icons of a kind, up to 50 for 4 icons and up to 150 credits for 5.

The rest of the symbols are the sandglass, an old book with a spyglass, a young blond holding a glowing green precious stone and a picturesque man with a parchment, wearing a red jacket and a bow-tie. These symbols award players 3-10 credits for 2 icons of a kind on an active line, 20-50 for 3 icons, 75-200 for 4 and 1000-4000 for 5 icons.

One of the most important symbols on the reels is the wild. At first sight seems like it acts as a usual wild – it substitutes for all symbols except scatters, but then you find out that on reels 2, 3 and 4 it expands to cover the whole reel! The scatter activates free spins if you receive on the reels at least 3 of them. When the Free spins mode is on, scatters increase the multiplier by the amount of scatters on the reels. 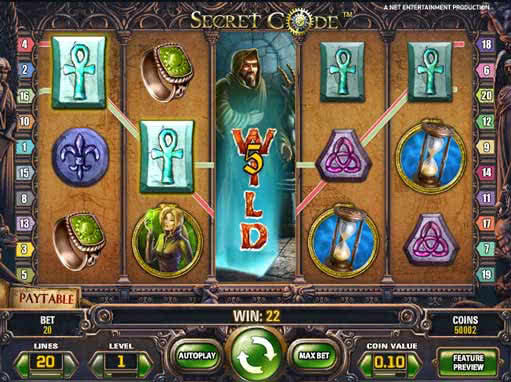 But the most important symbol is surely the Bonus one. If it appears on reels 3, 4 or 5 it triggers 1 bonus game where you have to guess correctly which key goes to each statue. You can actually watch the preview of the features any time you want just clicking the button on the functional panel.

In general, even though the functions and the bonus system act the same as in many other slots, the game is still truly unique due to the theme, images and sound effects. Fans of such novels as Da Vinci's code will find this slot the best they ever played. Other gamblers will appreciate its high-quality graphics and features.