Despite the name, BetSoft`s video slot Lost does not spit you out on a mysterious tropical island. Instead, you are assisting an Indiana Jones-type archeologist as he discovers the treasures within an Egyptian mummy`s tomb. It looks like Book of Ra online slot, doesn`t it?

This slot has some interesting and unique features that mean players can expect large payouts, but they have to click the button a lot between wins. Every winning spin retriggers the middle reel, giving the player another chance to win on the same board. Each respin adds a multiplier, up to five times the usual payout, so that if the player gets on a winning streak the game can payout several five-times wins in a row. 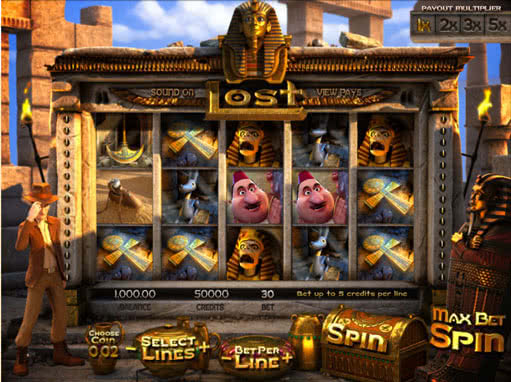 In addition, hitting a special wild symbol in the third reel will cause the wild to expand and take over all three symbols on that reel. On the fourth reel, a monkey randomly pops up to offer you a click-me type of round. You choose the symbols, and the monkey shows you the amount of credits you win. There is also a second screen bonus round where you pick doors for the archeologist, trying to avoid finding mummies inside.

Lost slot machine has 30 pay lines, with up to five credits for each line. Credits can be bought from 2 cents to 50 cents each.