The charming Oriental culture has been attracting people for already thousands of years. Quickspin developers don’t stand aside and created Sinbad  slot machine - a casino game based on the tale about Sinbad the Sailor, the character of Middle-East folklore. Try yourself in a role of brave sailor and explorer and look for the treasures yourself. But be aware of the hidden dangers which may appear on your way…

Up to 40 paying lines can be adjusted in this casino game - and this fact considerably increases your perspectives to hit the jackpot. The reels are arranged in an unusual manner: the principle of their position can be described like 3-4-4-4-3 horizontal rows, i.e. the number of rows on each reel is different. As for the symbols you will meet, they include pirate pictures which correspond to the general theme of the slot and special icons.

The crossed swords on the golden background are Wild images - they replace lacking icons and complete combos. But this is not their only function in Sinbad slot online - this image can also play the role of a Scatter and award you with Free Spins. And the benefits of it still haven’t come to an end - if you collect these swords in a profitable sequence you can be awarded with up to 500 additional coins. 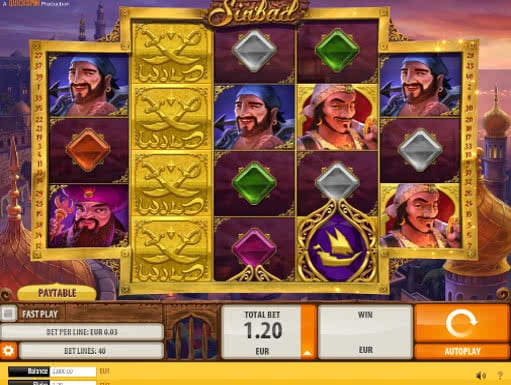 Quickspin slot games do not lack beneficial options, and this one is not an exception: there are two more Free spins rounds - Ape and Snake ones, activated by means of corresponding pictures.

0.40 Euro is a minimum amount of bet to be placed on one spin in Sinbad slots (if all lines are active) - this means that the minimum stake for a single line is only 0.01 coin! You’ll have to adjust these numbers before start and only after that the game is begun with regular Spin key or Autoplay, triggering continuous playing rounds.