Golden Fish Tank slot machine is issued by Yggdrasil software and belongs to the line of their newest products. It looks very modern and perfectly depicts the life of ocean bottom’s inhabitants. Being very rich in details, it can be called a pure eye-candy: if compared to classic slots of this theme like widely known Lord of the Ocean, for example, we see a huge step forward in slot producing made by developers.

25 paying lines are located on five reels and three rows which make up the construction of Golden Fish Tank. The Paytable of the game is not rich in symbols - there are only eight of them which are regular and one called bonus. Those which are considered as ordinary in their turn are divided into two main groups - those which depict the suits of cards and the ones related directly to main theme. 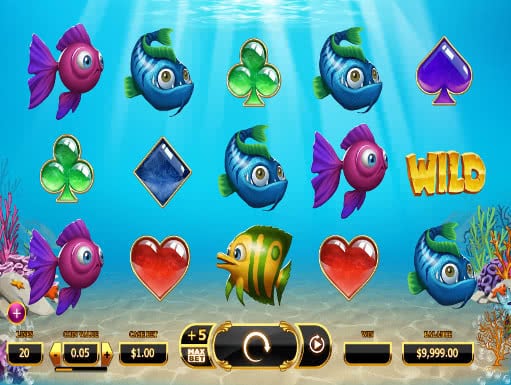 The card suits include four kinds: spades, hearts, clubs and diamonds. The hearts hide the biggest prizes of Golden Fish Tank slot game in this category - they are worth 75 coins, in case the sequence contains maximum amount of symbols (five). Themed pictures include icons of fish, among which the most valuable is the one which is colored in yellow and has green stripes on it. The combination of them can bring 250 coins award.

The Wild has the same word on it, so you will easily figure it out. It serves as an icon which replaces others and at the same time makes the most profitable sequences. The Scatter makes Free Spins active and depending on the amount of them participating in combination, activates from 6 to 10 of them.

For Those Who Are Always In Hurry

Not only PC version is available - for players who obtains gadgets the providers prepared mobile casino game. This version is light and fast, designed specially for the screens of tablets and smartphones: you can download app or launch Golden Fish slot online.