The biggest win on a line is paid. All win combos appeared on several lines are paid. Maximum win is 37 500 credits. Bet lines are set by pressing appropriate button (1, 3, 5, 7, 9 lines). Bet one/bet max  set the highest or the lowest bet. Data arranged by the player is displayed at the top in total bet, lines, credit windows. Autoplay option begins an auto round providing quicker and easier playing when there is no need in constant manual reel spinning. Paytable discloses slot's specialties, outlines winning lines and symbols combinations. 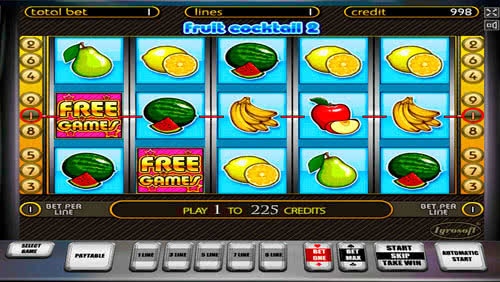 Risk game is available after each successful spin. The player is suggested to choose the only card from five appeared  on the screen. The first card is Dealer`s one and coefficient of the card chosen has to exceed it to double the win. If it's lower - you lose. The same cards nominal leaves the win unchanged. Joker image stands for Wild symbol and replaces orange, banana, apple, lemon, pear, watermelon symbols. Bonus course starts when at least 3 Bonus labeled symbols land on the reels functioning like Scatters. There are two bonus game variations in Fruit Cocktail 2. The first one launches by landing 3-5 Bonus symbols, while the second game`s start requires 3-5 Free Game symbols.