How many of you have at least once dreamed of being some Greek or Norse ancient god or goddess? There are so many myths and legends, books and movies about their power, deeds and life in general. So it's no wonder that children play role games calling themselves Zeus, Poseidon, Artemis, Odin, Thor or even Loki. Now even adults can remember these games and their roles: NetEnt has released a beautiful soft themed after Greek mythology.

Muse slot game is made in a very bright and colorful cartoon-style, in its color scheme blue and pink shades dominate and all characters look pretty funny. But this game is good not just due to its graphics (which is always exceptional in NetEnt's products). The design and gameplay are both well thought-out. Each detail on the reels and in the functional panel is carefully drawn and is in harmony with other elements of the design.

Another remarkable point about it is its symbols. You'll of course find the standard play cards 10-A but other symbols are all themed after the aforementioned Greek mythology. The main characters of the slot are Zeus' daughters – patron goddesses of art, music and literature. On 5 reels with 25 paylines players will find an harp, a parchment with a feather quill, a palette with brushes, a goblet of wine, grapes and others.

But what's really important about the symbols is that there are several kinds of wilds. The main is the Wild inspiration symbol. It can only appear on reels 2, 3 and 4 and replace all symbols except scatters in order to make a winning combination. When it's on the reels it triggers 1 of the 3 Wild features. In case it's Expanding wild, the wild covers the whole reel. If it's the Sticky wild then this symbol will stay at the same spot even after a re-spin. And when it's X2 wild, the wins are twice bigger. 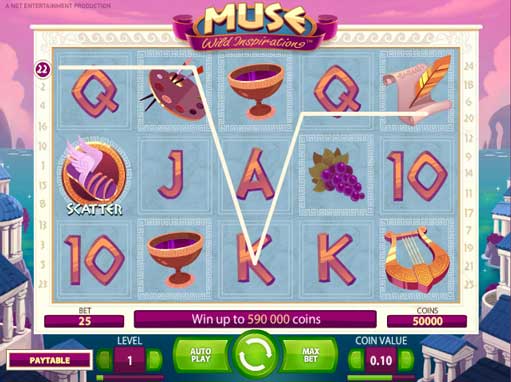 And this is not all about features. There are 10, 20 and 30 free spins for you to be awarded with if you receive 3, 4 and 5 scatters on the reels respectively.

The last point worth note is NetEnt's unique reel-feature – when you click any symbol on the reels you instantly see its payouts. There's no need to see paytable each time.

To sum up, it shall be fair to say that the developers were at their best creating this game. Fans of highly qualitative products will definitely love it even if they're not interested in Greek mythology at all.