Everyone without exception knows the story of the outstanding and fair robber of England, who mercilessly plundered all the rich dukes of Nottingham, who ferried their belongings through Sherwood forest, and then generously gave away the loot to the poor and needy. He gained a great love of the people that they didn't forget throughout the centuries, despite the fact that it was not a little hundred years ago.

Remember yourself as a child – many of us have played role games and everyone wanted to be a hero and in many cases exactly that guy. Now NetEnt, one of the world's leading gaming software developers, have also decided to support the love of the people to their hero and created Robin Hood 3D slot.

From the very first start you plunge into the atmosphere – the intro is a short video where Robin and his friends, including Ann, caught off guard the knights who serve the greedy duke, took the gold they carried and gave it all away to the poor. On 5 reels and 20 paylines you'll see symbols of Robin, his love Marian, their faithful friend Little John, who's not little at all, the abbot, always seen with a pint of beer, a knight – one of the hero's enemies, and such classic symbols like the play cards signs 10-A. All of them give different payouts – for cards you may get from 2 up to 75 credits, and for the characters – from 7 up to 1000!

There's also a wild depicted as golden 'Robin Hood' logo – it substitutes for all except the bag and 'free spins' symbols. If you collect 4 of those money bags, they'll turn into the wild after the reels shift – this happens after each win on a bet line. Each win on a shift guarantees a multiplier increasing with the amount of wins. Apart from the marvelous Shifting Reels feature there are also extra wilds – any symbol may become one during the Free Spins. 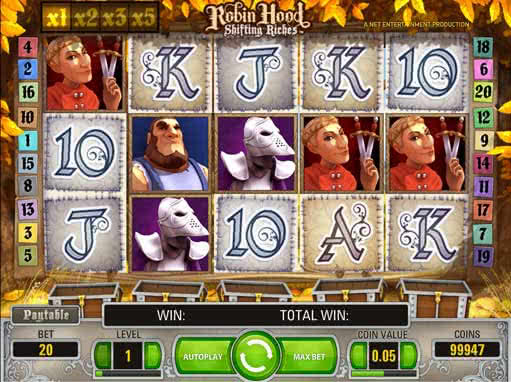 Playing Robin Hood slot machine you're also going to find some other interesting details. In general, the slot is definitely worth your attention due to its high quality of graphics, sound effects, well thought-out details and plot, but don't take my word – hurry up and take your first spin to see it all for yourself!