Aztec theme is a popular one among special themed slots and loved by casino game producers. Spirits of Aztecs slot machine is another slot which is referred to it, having 21 paying lines and five reels hiding the treasures of this ancient civilization. The graphics and general design can’t be called impressive, nevertheless, the most important thing is possible winnings, right? So, if we take this fact into consideration, we get high-quality product which will blow away the mind of thousands of gamblers.

Icons Of Spirits Of Aztecs Slot Online & Their Meanings

When you start playing this game, especially if you already tried slots dedicated to this particular theme (like Aztec Treasure slot machine), the icons may seem pretty familiar to you. They include card icons, but depicted in a weird way reminding the characters of Aztec alphabet, and these are the lowest-payed images. Then go symbols which reflect the original culture of Aztecs: ancient statues and sacred animals. 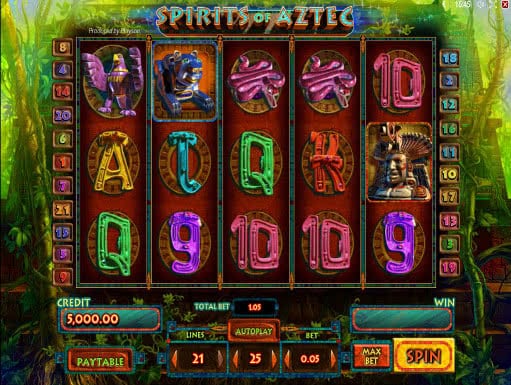 There are two icons you will certainly wait to appear while the reels of Spirits Of Aztecs slot game spin: they are the mask with a woman’s face and the picture depicting a skull. The first acts as a Wild: substitution of all icons except Scatter is its main function. Moreover, it can bring up to 10,000 coin reward if you gather five of them. As for the Skull, it will not be difficult to guess, that here it plays the role of a Scatter and triggers unpaid spins as usual. Five of them can pay up to 500 coins.

Trip To The Past: Start Your Journey Now

Spirits Of Aztecs slots obtain easy-to-understand menu, so that even a complete newbie in gambling could understand it. The most important button is Spin - use it to make the reels turning and begin the game. The other variant of start playing is Autoplay, a button that triggers series of uninterrupted spins.

Lines and bet per each one are easily adjustable by means of arrows located near corresponding buttons. And if you prefer risk and high stakes, use Bet Max - it automatically andjust all values to their maximum amounts.