PlayTech has released a new slot exciting the hearts of millions users. It all began in the distant 1933, when appeared on the screens black-and-white film about a giant primacy, breaking everything in its path. In 2005 there was published a colored version of the film by Peter Jackson. And now, after 6 years King Kong returns in the form of a video slot game (you may try this and another slots for free on our site). Thanks to the developers PlayTech, the idea to revive the legend of world cinema found its brilliant performance, and game can be enjoyed by visiting the casino lobby.

Information about the game

It is worth noting that the creators of slot King Kong managed to recreate the atmosphere of the film. It happened largely due to the presence in the slot the plot repeating events chronology in the film. So, events in the slot firstly move in the impassible jungles, then after the bonus game «Island of skulls» you together with the main characters of the film are in New York, where you are greeted by a new design of the symbols, and a new bonus game «City tower».

Slot King Kong from PlayTech has five reels, twenty lines. It features two game modes, special Wild and Scatter symbols, the function of re-spin feature, themed bonus rounds and other options. On line you can bet from one cent up to two dollars, and the total bet per spin can be up to forty dollars. If you enjoy King Kong slot, you should try Incredible Hulk for free too.

Play the slot machine King Kong can be launched in two modes: «Jungle» and «Big city». They visually change symbols, although payment table remains the same. They also have a different set of options (bonus rounds and so on). 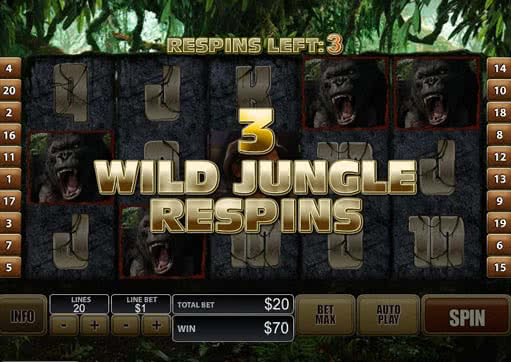 Three (in some cases two) or more identical symbols on the active line make a winning combination and paid. They must be on adjacent reels, starting from the first one. The exception is the Scatter symbol. The maximum multiplier is x5000. There is no Risk Game in the slot. To try the slot King Kong in training mode you can download a free slot in one of the online casino. The game will go on General rules, without any restrictions.

On the reels of King Kong slots machine fall out main characters pictures of the movie by Peter Jackson and denominations of cards from ten to ACE. As mentioned above, they are a little different from each other in different modes, but remain the same. 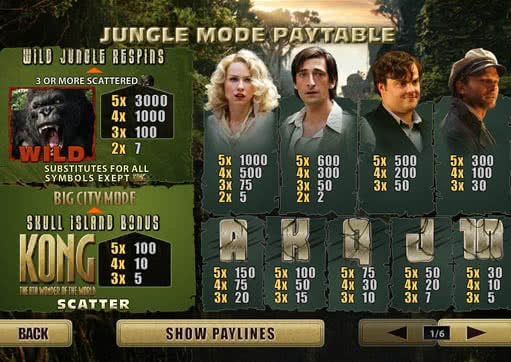 In first case all the reels spin three times, but fallen down on them Wild symbols remain there until the end of the tournament. In the second mode, begin three spins during which the different reels become «wild» (1+5, 2+4 1+3+5).

The logo of the game is a Scatter symbol. It is payable regardless of the active paylines number and location of the symbols on the screen. If a player sees three Scatters, he gets the prize in the amount of 5, 10 or 100 total bet on the spin. In addition in this case the bonus game begins.

Bonus rounds and their modes

In slot King Kong two bonus games that are offered in different modes:

Bonus Skull Island - the player chooses a point on the map, opening different beings, and this determines the size of the prize payouts;

Bonus the City Tower - King Kong is on the roof of a skyscraper, and the user chooses which of the attacker aircraft he should bring down.

Rotating reels can be ahead of schedule stopped. Settings allow you to modify the appearance of the slots and switch off the sound. There are no Progressive Jackpots in the King Kong slot game.

King Kong is a great slot from PlayTech. We can long tout two modes with their features, colorful design, unexpected variations of standard options, and high functionality, but it is better to download a game machine and appreciate it by yourself.