Pirate by Igrosoft features all classical attributes and symbols of adventurous Pirate's sagas that is the matter to attract more fans to this popular slot. Pirate has standard Igrosoft interface and regulation desk with optimal buttons set.

How to play Pirate slot machine

To get acquainted with slot's symbols, beneficial lines and combinations check Paytable as it contributes to general comprehension of the Pirate slot rules, just as in other Igrosoft slots. Next to Paytable there are five luminous buttons powered to set number of playing lines - one, three, five , seven, nine are available. One line can be bet up to 25 credits making 225 in total. To control the bet press Bet One button adding stating the bet by one point adding. Bet Max allows to play at the highest possible bet. Automatic Start turns off manual playing function and reels spin automatically offering win combinations for the player's benefit. Auto spins are finished by pressing Start/ Skip/ Take Win button. 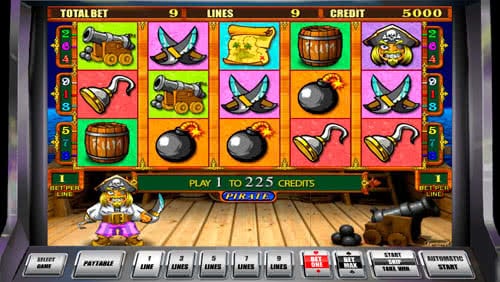 Among pistols, guns, daggers, hooks, telescopes there is special Wild symbol - the pirate's image. It successfully replaces other symbols and creates winning combos. If you managed to get one of them during main game you'll be proposed to double the win by coming over Risk game. Risk game lies in guessing the dice's color (red or black), right choice doubles the win while wrong cancels it. The risk game can be rejected by pressing Start button before the color is selected. Chest Scatter symbol  in quantity of three and more lands on reels and starts a bonus game. It refers to opening five chests trying to select one with bonuses inside. If selected chest contains bones the game is over. If more than 3 barrels appear on the screen the second bonus game takes place. By stopping the spinning dices you open certain barrel. If it has gems inside - you are winner, empty barrel ends the game.