Ghost Rider online slot is based on popular Marvel comics. This is a story of a stuntman Johnny Blaze who sold his soul to the demon Mephisto for his mentor's life. In exchange stunt-rider must collect the souls of sinners while serving the devil. Comics became highly popular in 2007 when Ghost Rider movie after Marvel studio's original story was released. Now you get the chance to experience the fight with evil and get your reward for it!

A supernatural slot with absolutely real features and bonuses

Ghost Rider is a 5-reel slot where you may play up to 20 playlines. There's a convenient Auto play function offering 10, 25, 50, 99 spins and “until feature”. There's also a “bet max” button which automatically makes a spin when you push it. Almost all symbols are animated and movie-themed, except for the play card symbols from 9 to Ace. The Flaming skull is a wild symbol which can replace any symbol on reels 2, 3 and 4 if thus you get a win combination. But it can't stand for the game logo, as it is a scatter symbol, and a flaming motorbike – bonus symbol. It is a truly profitable slot like Elektra slot online. 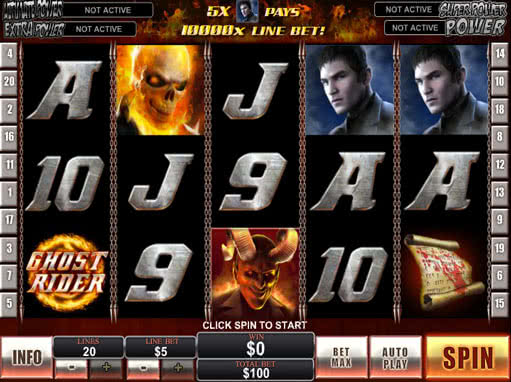 Get 3 or more scatter symbols and get acсess to 10 free games which a played with x3 multiplier. If you manage to activate  all reels at a time you're rewarded a Ghost Hunt bonus – destroy 10 ghosts for money. But the greatest bonus are definitely Marvel's 4 levels of progressive jackpots where you can win: Power, Extra Power, Super Power and Ultimate Power, all of them get you different sums. If you're lucky enough to win a jackpot, a special Jackpot screen will open and you'll see 20 squares hiding different icons. If you match 3 same symbols – my congratulations, grand prize is yours!