China Mega Wild is a slot machine with 20 paylines and five reels by GamesOS. During the game, two special symbols may appear on the game screen — Wild and "multiplying" icon. Having successfully collected these symbols, you can double the win for a combination. The slot is available in demo mode. The biggest prize for a full combination of symbols with a crane is 5,000 demo credits that is the coin of free online slots.

Symbols and odds of the China Mega Wild slot machine

The China Mega Wild slot machine features only two special symbols — Wild and Multiplier. At its core, both perform the function of a Wild symbol. Appearing on a line with identical icons, they can "turn into" the missing one. So, a combination will be formed or increased by one picture.

The symbol of a dragon — the Wild. It can substitute for all icons except "multiplying" ones. What's more, appearing on the third reel, it completely covers it increasing the odds of forming winning combinations. It has no multiplier of its own.

Portrait of a girl is a "multiplying" symbol. If it appears after a winning combination, it pays at double rate. Similar to the dragon, when it appears on the third reel it fully covers it and allows you to collect more combos. It has no multiplier of its own.

Common symbols are divided into two relatively equal groups. The minimum number of icons in a combination is two but this payout hardly covers the value of the Total Bet. With the highest line bet of 1 credit and the total wager of 20 credits, you will need several short combos of two or three symbols to return the cost of a spin. Or hope to catch the "multiplying" symbol in order to double the prize. 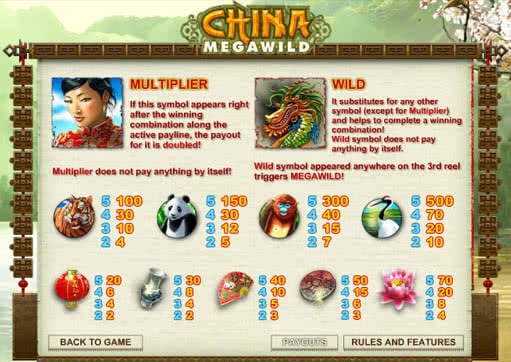 The game session begins with setting the line bet and active lines. The Line Price button is responsible for the line bet. By clicking it, you can adjust the value from 0.01 to 1 credit. All buttons are interactive, +/- and Line Price. You can make the highest wager by hitting the Bet Max button. In this case, all 20 lines will be selected as active automatically and spinning will begin.

You can control lines using the Bet One button and the special regulators '+' and '-'. The more active lines, the higher the chance of collecting a combination of symbols. The fact is that winning patterns are those that land on the active lines that are involved in a spin. For example, 5 out of 20 lines are selected. This means that all the symbols that drop on 6-20 lines will not pay. You can see the payline pattern in the pay table.

Values in Line Price and Bet One sections form the Total Bet — the total cost of one spin of reels. Among other things, Line Price affects the size of payouts for combinations. They are calculated by the formula where the line bet is multiplied by the symbol multiplier from the pay table.

Winning combinations are those that consist of the same symbols and are on the same active line and adjacent reels. It is important that one icon is on the first reel since combos pay from left to right.

After hitting the Spin button, the reels will perform one spin. If a winning pattern appears on the game screen as a result of a spin they will be highlighted and the winnings will be automatically credited to your balance. The second way to set the reels in motion is the Auto Spin function. Hit the button on the control panel to open the setup menu. Specify the desired number of automatic reelspins in the Pick the number of auto-spins section. In the main game, you can also click 5x or 10x to make five or ten auto spins. Additional information section of the control panel:

Having played The China Mega Wild online slot for free, you are now ready to take on the online casinos with their play for real money option.