There are 5 reels but there aren't any paylines – instead, there are 243 ways to win! You don't have to receive some certain combinations but just get some amount of same icons in a row starting from the leftmost reel. Different symbols give different payouts from 3 credits up to 1000.

So why should you definitely play Twin Spin?

On the reels you're going to find classic symbols that together with the sound effects create an atmosphere that takes you to Las Vegas with its shining lights, luxurious cars, hotels, casinos and beautiful people... Looking at those well familiar sevens, bars, bells, play cards, diamonds and especially cherries makes you feel like standing by a real casino's slot machine in Vegas. It reminds Fruit Sensation and other fruit slots.

But the best about it all is the reason why it is called Twin Spin slot. The name is taken after its greatest feature: each time you take a spin, 2 adjacent reels will be identical. And it doesn't matter where you find them, on the left or right or in the middle – a reel on any position can find its twin by the end of the spin and thus your chances of getting a winning combination are rising, since there will always be at least 2 symbols of a kind. This is the unique feature that you will never see in a traditional online slot. Moreover, there may appear not just 2 same reels – the feature may become bigger and involve 3, 4 or even 5 reels! Sounds fantastic and it's all possible with this brand-new Twin Spint! 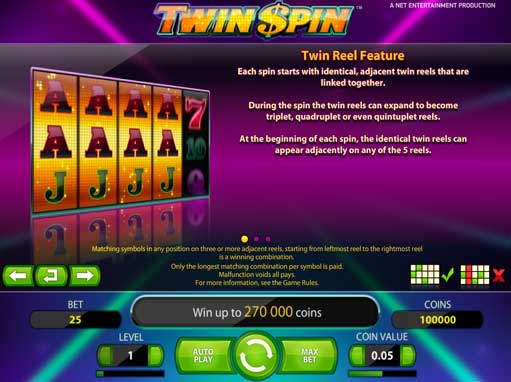 What's more, your chances are increased by the wild symbol (the image of red Wild logo) which can substitute for any other symbol when needed.

In general, the slot can be considered an innovation in the world of online video slots, but don't take my word – take your first spin and see if it's true right now!