Slot machine Blade is a true horror in excellent its implementation. The atmosphere is built on a plot of comics from Marvel (in addition, Iron Man 2 was created from Marvel comics too), and released much later an art movie Blade. Adjusting buttons of this video slot are whole in the blood. Blood streams down the metal card symbols on the reels. Portraits of heroes are well-animated when drafting combo. Of course graphics and style decorated unsurpassed. If you prefer to play free online slot machines - do not wait a single second, move into pitch dark world of vampires!

All attributes of the battle with evil spirits which the main character applies during raids you can see on the 5 reels. Except common cards symbols usually used in the slot machines you can see other symbols include weapons such as the boomerang blade, silver stakes, guns and general symbols such as vampires, blade logos and blade split symbols (more detailed on this later). 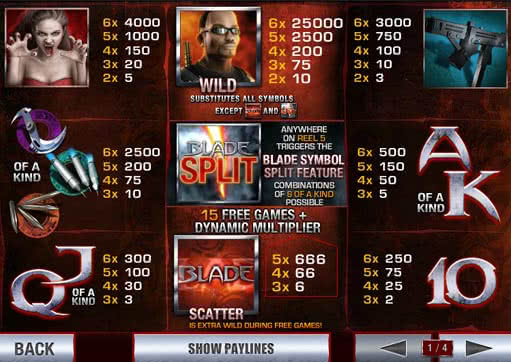 Bets from 1 up to 10 coins can be placed on 20 lines. Payments received when a player collect 2 identical images on the 1 active line. The smallest payments machine provides for the collection of card symbols per line. For example, 3 silver sign 10 will give you back 3 your bets. The greatest prizes are offered to those who catch the portraits of the main characters or weapons of blade on the reels. For example, for completed payline of guns with bullets from silver you can get 3 thousand bets. 6 pics of Blade promise payment of 25 000 - the greatest prize allowed in this slot machine.

Wild symbols in the game presented by the main hero Blade. It replaces any other symbol which is missing to complete winning combinations, except the symbols Split and a Scatter symbol.

Scatter symbol is also presented as vampire killers (sign Blade) and the quantity of three can multiply the bet by rate of x6 to x666. Moreover, when in any of the positions of the screen appeared 3 scatters, the reels start rotation 15 times completely free meanwhile the multiplier grows. During free spins Scatter symbol is replaced by Wild forming wins varying degrees of payment. Spin will begin again if 3 symbols of Blade back on the screen. 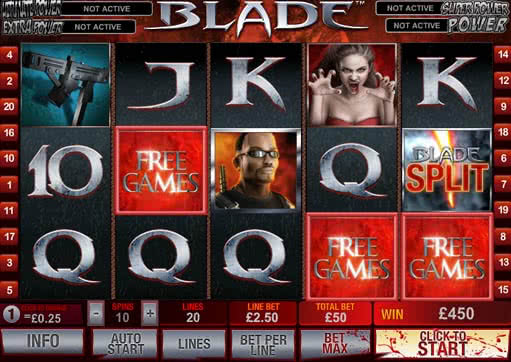 The only a reel where you can meet bonus symbol Blade Split is 5th reel. Even being singular it activates the bonus feature. The last symbol in the winning combination divided to 2 identical symbols and allows forming a winning combination of 6 images. During free spins game Split function is also available: any symbol can be divided except the logo Blade.

Online slot Blade connected to four special progressive jackpots, which are called Power, Extra Power, Super Power and Ultimate Power. Each of these jackpots can be won randomly. Any spin for any amount of money can bring you entering the Jackpot game. You don't even need to complete a winning combination. If you can activate the game on jackpot - you will win one of the four special progressive jackpots Marvel.

It is better to play this slot machine for real money, because of the different jackpots and payouts. You should just try to play, and you will not be disappointed. Colorful graphics and sound design only cheer up!