So, the whole action takes place under the sun of Mexico. You’ll meet the principal of the town - Captain Diaz and three brave guys: Pepe, Paso and Pico - the slot was called Taco Brothers after them. How to distinguish them? Well, Paso is fond of cigars - he always has the one in his hands, Pico think that dynamite is the best weapon, while romantic Pepe carries his guitar to sing serenades.

The brothers are the most valuable symbols in the game. You can earn from 100 to 400 coins for collecting several pictures of them in a combo. And if three of them occur on the reels of Taco Brothers slot machine simultaneously, then it’s time to have some fun! 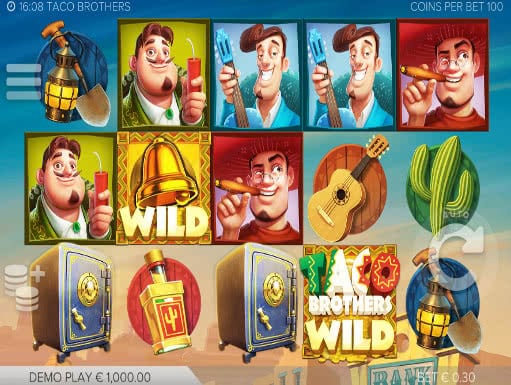 To activate bonus round three Safe icons should fall on the reels. When this round is triggered, re-spin function may also be activated. If you launch Free Spins round, prepare for Exploding multiplier to appear - they considerably increase the opportunities to hit the jackpot.

How To Operate The Slot - Few Useful Tips

You should pay your closest attention to the process of placing bets, especially while you gamble slot for real money. In Taco Brothers slot online their values are represented in a wide range - from 0.10 Euro to 50 Euro per spin. Then use a transparent key with arrow depicted on it and the reels start spinning. All the playing processes are accompanied with the background sounds, which may be turned on and off in the corresponding section of the menu.