Total credits amount is 225 that gives 25 credits for each of 9 lines. All round winnings are summarized and displayed in credits. General bet is cut between chosen bet lines. The bet is regulated by red Bet button which is to be pressed appropriate number of times. Five buttons with number of lines (1, 3, 5, 7, 9) set the playing lines. Autoplay option turns the automatic regime on while Max bet button opens the round on highest indexes. Start button is also used to skip any ongoing actions and to take the win.

Gnome's face picture substitutes for umbrella, helmet, lamp, hummer symbols and represents the Wild. The main game win can be increased in risk game although it can be rejected as well and initial round goes on. In Risk game one of four closed cards is to be selected. To understand if you win or lose compare nominal of the card chosen with opened Dealer's card. If your card`s nominal exceeds Dealer's one the win is doubled, if it's not - you lose and return to regular game. If two cards are identical the player is given second suggestion to risk. 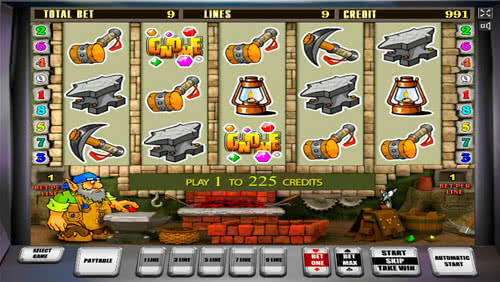 Bonus game is available when 3 and more tub Scatter symbols land anywhere on reels. The win is determined by one of five handles which are pulled to get the jewelries. However jewelries sometimes are displaced by dirt and if you get them flowing out of the trolley -  the game is over. Credit number which goes beyond 25 gives the gnome mushroom to protect his head and grants the second chance. The super bonus game becomes accessible if the jewels were successfully derived from all trolleys in Bonus game. In super bonus game the player has to make a right choice between two dower chests and get up to 500 rewarding bets.